Lessons from Malaysia: How to benefit from Belt and Road Initiative without falling into a debt trap

Mahathir Mohamad’s threat to review Chinese-financed projects and cancel those his country couldn’t afford got him a much better deal from Beijing. Mahathir Mohamad came out of retirement, forged an alliance with a former deputy turned political foe, emerged triumphant in the May 2018 general election and took the oath of office as prime minister at age 93. The world was taken aback, to put it mildly, with none more surprised than the leaders of China.

Mahathir made China a major campaign issue. He accused the incumbent, Najib Razak, of “selling out” the country to China, and promised that, if elected, he would review Chinese-financed projects and cancel those that the country could not afford. The threat of cancellation of a China-financed project in Malaysia followed by restoration provides lessons for all concerned.

China struggles with how to deal with this “new” Mahathir. In his first term, lasting from 1981 to 2003, the two nations were mostly on the same page as the Malaysian leader employed his quick wit and acerbic tongue against the West while advocating interests of the developing world.

Now, Mahathir wants to cancel projects guaranteed by his predecessor, in particular, the $13 billion East Coast Rail Link connecting Port Klang on the Straits of Malacca to Kota Bharu in northeast Peninsular Malaysia. Construction started in August 2017. Moreover, in a visit to China, Mahathir warned against “new colonialism” without naming China, though his meaning was clear. China, pretending not to hear, treated him as an “old friend”. Neither side wanted an open break; each nation wanted the project to continue, but on its terms.

In late April, just before Mahathir arrived in Beijing to take part in the second international forum on the Belt and Road Initiative, the two sides reached a deal: China shaved roughly a third off the original cost. In Beijing, Mahathir made it clear that he supported China’s initiative. He even visited the Huawei office to show that Malaysia, unlike the United States, is not fearful or suspicious of the telecom supplier.

Mahathir’s actions have had an impact on other countries and their dealings with China, and they recognise they must drive a hard bargain. After all, 30% is a big discount on any project, especially one that runs into billions.

Developing countries have two cautionary tales from which to draw lessons. There is Sri Lanka, which had to forfeit Hambantota Port to China in a 99-year lease because of its inability to repay debt. That experience gave rise to the “debt trap” narrative.

Malaysia’s story, with its happy ending, provides another lesson: each country must look out for its own interests. No one can expect Chinese bankers to look out for the interests of foreign borrowers.

Sri Lanka, despite its experience, continues to have amicable relations with China and borrow large amounts. Its ambassador in Beijing, Karunasena Kodituwakku, was quoted as saying in early February that his government was seeking a billion-dollar loan on concessional terms for a highway project. The envoy rejected allegations of “debt traps” from China. “China never forced us to take a loan,” he was quoted as saying. “If there is something wrong with the loans we have taken, it’s our responsibility. It’s not fair to blame China or another country.”

The New York-based consultancy Rhodium Group, which conducted a study of 40 cases of Chinese debt renegotiation between 2007 and 2019, said aside from Sri Lanka there was no other case of asset seizure. The 40 cases involved 24 countries in Asia, Africa and Latin America and about $50 billion of loans. In most cases, Rhodium reported, debts had either been written off or payment was deferred. 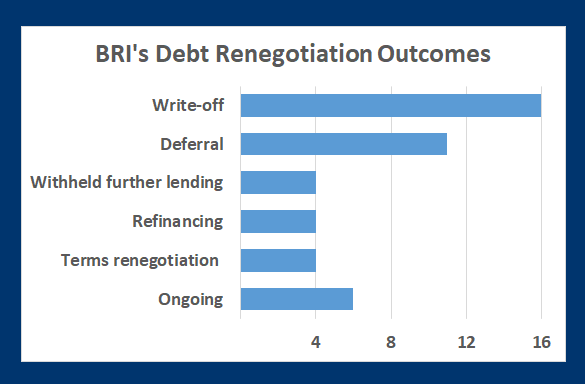 According to Yi Gang, governor of China’s central bank, Chinese financial institutions have so far provided more than $440 billion in funding for Belt and Road Initiative projects. Nonetheless, countries will draw their own conclusions. In Asia, countries such as the Philippines, Indonesia and Laos are in serious need of infrastructure financing and weigh whether and to what extent they should participate in China’s projects.

The Philippines is in something of a bind. While President Rodrigo Duterte has adopted a policy of friendship toward China, the two countries have overlapping territorial claims in the South China Sea. Mahathir visited Manila in March and warned the Philippines about becoming too indebted to China in drawing down a $9 billion credit line offered to Duterte during his 2016 visit to Beijing. Some reports suggest $300 million has been used to develop dams and irrigation projects.

The Philippines has learned from the experience of Sri Lanka and Malaysia. Socioeconomic Planning Secretary Ernesto Pernia said in April that the government is being “extra careful” to avoid “debt traps”. High levels of transparency, he said, increase the likelihood that projects are viable and capable of generating revenues to pay back the loans. There have also been reports that the Philippines is seeking to secure loan assistance for infrastructure projects through the Asian Infrastructure Investment Bank rather than directly from China. Even though the bank is led by China, its loans come from international capital markets and so are likely to have higher standards of transparency and accountability.

Indonesia’s investment minister, Tom Lembong, in an interview with the South China Morning Post while in Beijing for the BRI forum, said that he found Beijing’s openness to feedback “highly encouraging” and predicted multibillion-dollar investments by Chinese firms in four regions of his country earmarked as future growth drivers. Lembong said he had proposed to the Chinese the involvement of professionals who could structure fair and financially viable deals. In fact, the Indonesian Investment Coordinating Board, which he heads, had signed an agreement with Chinese investment bank China International Capital Corporation to scrutinise new BRI investments.

The Indonesian official projected that over the next decade, BRI would stimulate additional investment amounting to tens of billions of dollars, and the priority or both sides is to ensure “the quality of investment, not just the quantity”. At present, the only BRI project in Indonesia is a $6 billion high-speed rail to connect Jakarta, the capital, with Bandung, with financing primarily from China Development Bank.

BRI is also constructing a railway in Laos that will connect Vientiane, the capital, with Boten, in the north bordering China’s Yunnan province. Construction started in December 2016 and is scheduled for completion in 2021. The goal is to transform Laos from a landlocked country into a “land-linked” hub.

However, western analysts estimate that Laos, along with seven other BRI countries, are near or in effective default. In addition, United Nations human rights expert Philip Alston, who visited Laos in March, warned that the government favors big-ticket projects while ignoring the needs of its people.

China, too, is drawing lessons. President Xi Jinping pointed out in his opening speech at the forum that China would institute reforms. He emphasised the need for high quality, sustainability, reasonable pricing as well as transparency and noted, “Everything should be done in a transparent way.”

With transparency, everything else follows. If China can live up to this pledge, the path for its Belt and Road projects should be much smoother.

Frank Ching is a journalist and author ofAncestors: 900 Years in the Life of a Chinese Family.