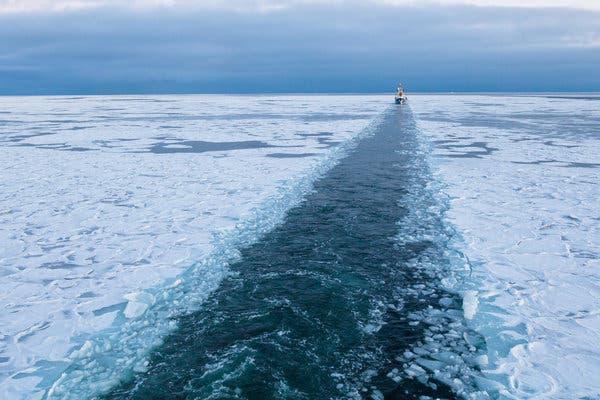 An open lane on the Northern Sea Route, which is becoming more navigable as the Arctic warms.CreditCreditAlexey Solodov/Alamy

Want climate news in your inbox? Sign up here for Climate Fwd:, our email newsletter.

ROVANIEMI, Finland — The Arctic is thawing, and China is seizing the chance to expand its influence in the north.

For China, the retreating ice potentially offers two big prizes: new sources of energy and a faster shipping route across the top of the world. To that end, the country is cultivating deeper ties with Russia.

More than 3,000 miles from home, Chinese crews have been drilling for gas beneath the frigid waters of the Kara Sea off Russia’s northern coast. Every summer for the last five years, Chinese cargo ships have maneuvered through the ice packs off Russia’s shores — a new passage that officials in Beijing like to call the Polar Silk Road. And in Shanghai, Chinese shipbuilders recently launched the country’s second icebreaker, the Snow Dragon 2.

China’s ambitions in the Far North, said Aleksi Harkonen, Finland’s ambassador for Arctic affairs, mirror its ambitions everywhere else. “It’s after global influence,” he said, “including in the Arctic.”

The China-Russia partnership advances both countries’ agendas in the region, at least for now. It also comes against a background of rising hostilities between China and the United States over issues like trade, territorial claims and allegations of espionage.

That tension is spilling over into the Arctic.

In April, the Pentagon, in its annual report to Congress on China’s military power, included for the first time a section about the Arctic and warned of the risks of a growing Chinese presence in the region, including the possible deployment of nuclear submarines in the future.

You have 1 free article remaining.

And this month, Secretary of State Mike Pompeo used a meeting of foreign ministers here in Rovaniemi, just a few miles south of the Arctic Circle, to assail China for what he called its “aggressive behavior” in the region and pointed to Beijing’s actions in other parts of the world. 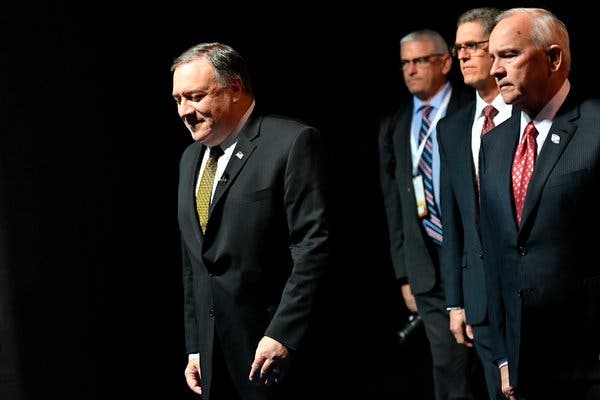 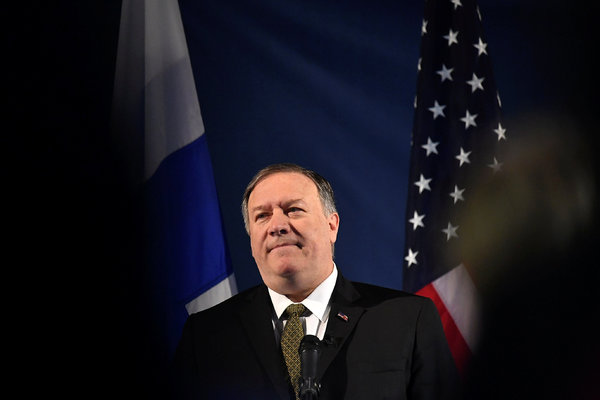 But Beijing has much to gain, strategically, in a warming Arctic, and it is focused on the long game. Wealthy and ambitious, it can afford to be.

China is trying to pour money into nearly every Arctic country. It has invested billions into extracting energy from beneath the permafrost on the Yamal Peninsula in northern Russia. It is drilling for gas in Russian waters alongside the Russian company Gazprom. It is prospecting for minerals in Greenland. And its telecommunications giant is eager to partner with a Finnish company that wants to lay a huge new undersea internet cable to connect Northern Europe with Asia.

The approach is not entirely new. China struck a free trade deal with Iceland six years ago, giving tiny Iceland a giant market for one of its main exports: fish. A Chinese company proposed to partner with Greenland in rebuilding airports, prompting Denmark to step in and underwrite the project instead. Another Chinese company proposed to build a port for Sweden, but backed out amid fraying diplomatic relations between the two countries.

“Arctic countries can’t say no to investments. That’s clear,” said Mr. Harkonen, the Finnish diplomat. “We want to be sure we know what China is after.”

In addition, Chinese ships are sailing the Northern Sea Route. The state-owned China Ocean Shipping Company has sent its cargo vessels across the Arctic multiple times over the last five years, and is planning more voyages this summer. A company official told a recent Arctic affairs meeting in Shanghai that the northern route cut 10 days off a trip from Asia to Europe compared with routes through the Indian Ocean and the Suez Canal. 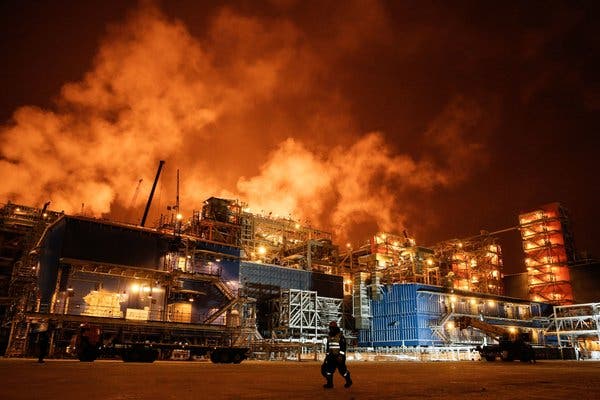 Though the North Sea Route is still a very tricky passage to navigate, climate change is opening up that shipping lane for longer stretches of the year. The Arctic is warming twice as fast as the global average, with the average extent of Arctic sea ice reaching a new low this April, according to the National Snow and Ice Data Center.

Finally, and perhaps most importantly, China is partnering with the leading expansionist power in the region: Russia, which sees the Arctic as key to its future wealth and power.

It is an increasingly vital relationship for both countries. Russia needs Chinese investment to extract the natural resources under the permafrost and monetize its long Arctic coast, especially after the United States imposed sanctions over Russia’s 2014 annexation of Crimea.

And so, Russia’s onetime wariness of competition in the Arctic has given way to a new openness with China.

“Though Russia and China would be natural competitors for Arctic resources and influence, they have started cooperation knowing that only together they can outcompete the West,” said Agnia Grigas, an energy expert in Washington and author of a recent book on natural gas and geopolitics. “China’s need for energy sources and Russia’s economic dependence on fossil fuel exports depends on this.”

President Vladimir Putin has met with his Chinese counterpart, Xi Jinping, more than any other foreign leader. Mr. Putin is personally cultivating investments from Chinese companies in energy and transport infrastructure across his country’s vast Arctic expanse.

In April, Mr. Putin appeared alongside Mr. Xi in Beijing to propose linking the thawing Northern Sea Route in Russian waters with China’s huge infrastructure drive, known as the Belt and Road. It could create, Mr. Putin said, “a competitive, global route” linking much of Asia to Europe. 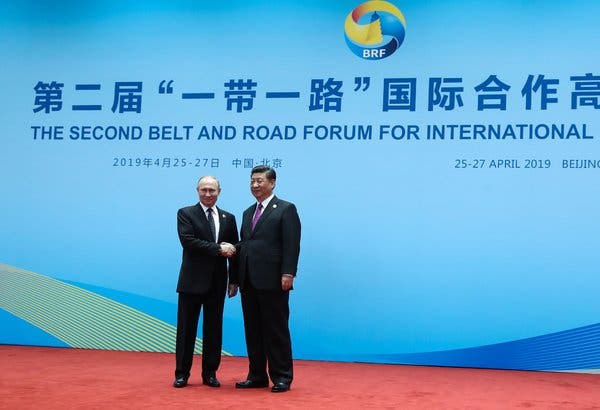 China has provided crucial financial backing to the huge natural gas project on the Yamal Peninsula. In turn, China has secured access to what it desperately needs: energy for its hungry domestic market.

There’s more cooperation in the works. China and Russia recently announced that they would set up a joint research center that would study, among other things, changes in sea ice conditions along the Northern Sea Route. And the Poly Group, a Chinese state-owned corporation, proposed in 2017 to build a new deepwater port in Arkhangelsk, on Russia’s Arctic coast.

But the relationship is complicated.

China is building a second icebreaker able to cruise polar waters. Russia, which essentially rents out its much larger fleet of icebreakers to guide foreign ships through the Northern Sea Route, is not crazy about the competition, according to a Pentagon analysis published this year as part of its annual report to Congress.

Russia has strongly opposed the idea that any foreign icebreakers could ply that route, which Russia today dominates.

A team from the Chinese icebreaking research ship Xue Long, or Snow Dragon, on the Arctic Ocean. A second icebreaker, Xue Long 2, is expected to enter service this year. CreditWu Yue/Xinhua, via Alamy 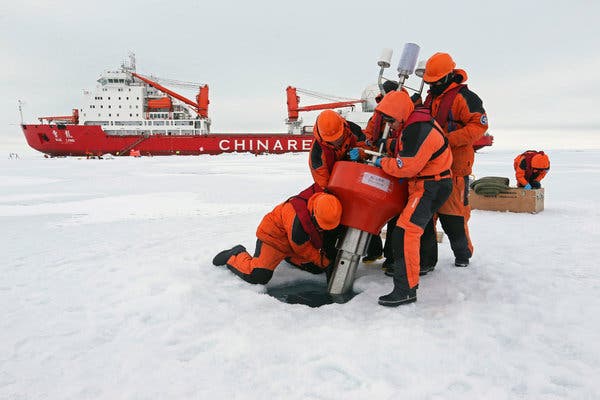 A team from the Chinese icebreaking research ship Xue Long, or Snow Dragon, on the Arctic Ocean. A second icebreaker, Xue Long 2, is expected to enter service this year. CreditWu Yue/Xinhua, via Alamy

Not least, the Russian military is flexing its muscle in the region, reviving Cold War-era military bases along its northern coast and modernizing its nuclear submarines.

China has said it wants to build a deepwater navy to protect its expanding interests around the world. That means, where Chinese strategic investments are made, the Chinese Navy is likely to follow.

But China, playing the long game, might have time on its side. If the retreat of sea ice continues, much larger portions of the Arctic would become navigable, making it harder for Russia to rule the waters of the Far North.

Heather A. Conley, a researcher at the Center for Strategic and International Studies in Washington and an author of a report on China’s Arctic ambitions, said the United States had ignored the Arctic for too long. Washington, she argued, should expand its presence in the region, and it should work with international forums that bring together governments in the region.

Otherwise, she warned this month in testimony on Capitol Hill, “U.S. access to and influence in the Arctic region will diminish and our allies and partners in the region will increasingly accommodate Russia’s and China’s preferred policy outcomes.”

Military Drills in Arctic Aim to Counter Russia, but the First Mission Is to Battle the Cold 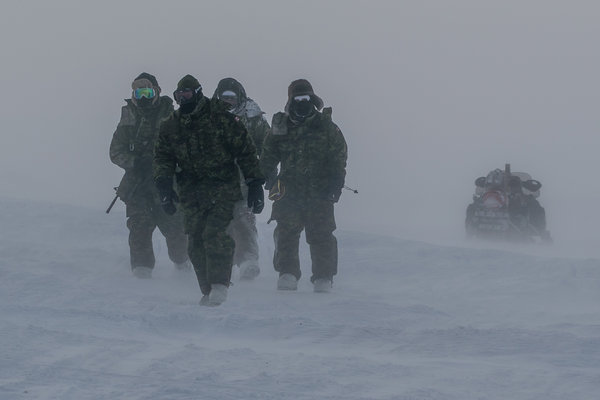 Steven Lee Myers is a veteran diplomatic and national security correspondent, now based in Beijing following tours in Moscow, Baghdad and Washington. He is the author of “The New Tsar: The Rise and Reign of Vladimir Putin.” @stevenleemyers • Facebook

Somini Sengupta covers international climate issues and is the author of "The End of Karma: Hope and Fury Among India's Young." @SominiSengupta • Facebook