China reveals Arctic geopolitics to be above Pompeo’s pay grade

“China, strictly speaking, is a near-polar country.” So remarked Wang Hong, administrator for the State Oceanic Administration of the Chinese Ministry of Natural Resources, during the opening speeches for the Arctic Circle Forum, an international Arctic development conference that kicked off today in Shanghai. A casual observer who wandered into the brightly lit dome-shaped auditorium in the city’s Science and Technology Museum might have found it hard to understand why discussions about the edges of the Earth had any reason to take place on China’s coastline. Yet as former Icelandic President Olafur Ragnar Grimssón made clear:

“The security of Shanghai in the future will be determined in the Arctic.”

Sea level rise poses a major threat to Shanghai – a city declared by British and Dutch scientists in a 2012 study in the journal Natural Hazards to be the world’s major city most vulnerable to flooding in a climate-impacted world. Every chunk of the Greenland Ice Sheet that calves into Baffin Bay imperils Shanghai just a little bit more. Shanghai if all the world's ice melted. Text added to map from National Geographic.

But as the high-level presentations made at the conference today made clear, Grimssón’s statement should probably be reversed, for the security of the Arctic across all dimensions, from the environment to the economy and culture is increasingly being determined in China. In his speech, Wang, the State Oceanic Administration bureaucrat, noted:

“Shanghai and a lot of other cities around the world are so closely related to the developments in the Arctic, so what is important is that we should use cooperation to override the distance.”

Enhancing cooperation is one way in which China, as a professed “near-Arctic state," is trying to close the gap between Arctic states and itself. At the forum, various Chinese officials emphasized the country’s adherence to the United Nations Convention on the Law of the Sea (UNCLOS), its participation in the Arctic Council as an observer state, and its bilateral relations with Arctic states.

Yet China is also closing that distance between its
territory and the Arctic in ways both metaphorical and concrete.

First, Chinese officials at the conference have been surprisingly vocal in their support for indigenous peoples. Gao Feng, the Special Representative for Arctic Affairs within China’s Ministry of Foreign Affairs, expressed, “China respects the cultures and traditions of indigenous peoples in the Arctic.” I asked a group of Chinese students what their biggest surprise of the conference so far had been, and they said it was the frequency with which indigenous peoples were mentioned.

This discursive appreciation of the importance of Arctic indigenous peoples takes place within a somewhat delicate and fraught context. On the one hand, China claims to have no indigenous peoples of its own (it has ethnic minorities, but in the official Chinese view, indigeneity is a result of colonialism, which is seen as a uniquely Western experience). But on the other hand, China has been promoting its own ethnic minorities as a way of becoming not just a near-Arctic state, but a more-Arcticstate, too.

Near the escalator, an Evenki cultural exhibition organized by the Aoluguya Township Government in Inner Mongolia and the International Centre for Reindeer Husbandry showcased indigenous crafts for sale. One woman in traditional dress sat looking vacantly in the tent, while others chatted more animatedly outside. 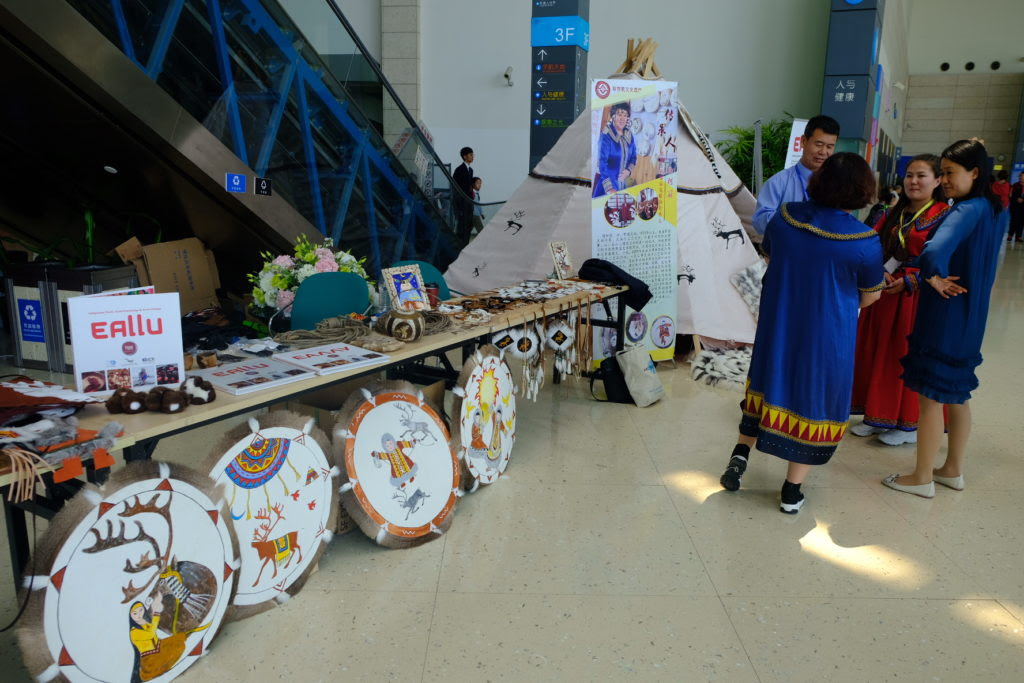 A Chinese Evenki exhibition at the Arctic Circle China Forum in Shanghai. May 2019.

In the afternoon, there was a conference session on “Indigenous Communities and Livelihoods in a Changing Arctic” with talks such as “Reindeer Protection in China’s Belt and Road in the Indigenous Arctic,” “The Way of Cultural Inheritation [sic] and Development of Chinese Reindeer Ewenki,” and “Studies of Chinese Near Arctic Peoples.” So not only is China a near-Arctic state: it has “near-Arctic peoples, too” – even if the government does not recognize these people as strictly indigenous.

Representing the second and more literal way in which China is closing the gap between itself and the Arctic, Chinese companies have vastly improved their polar maritime capabilities. During a session entitled “Paving the Polar Silk Road” – a task which seems impossible given the difficulty of laying asphalt on fast melting ice – speakers from companies like COSCO, the Chinese shipping company that owns more container ships than all but two other lines in the world, and PetroChina, part of China’s biggest oil producer, showed that if any country is willing to try to pave paradise and put up a parking lot, in the lyrics of Joni Mitchell, it’s China. 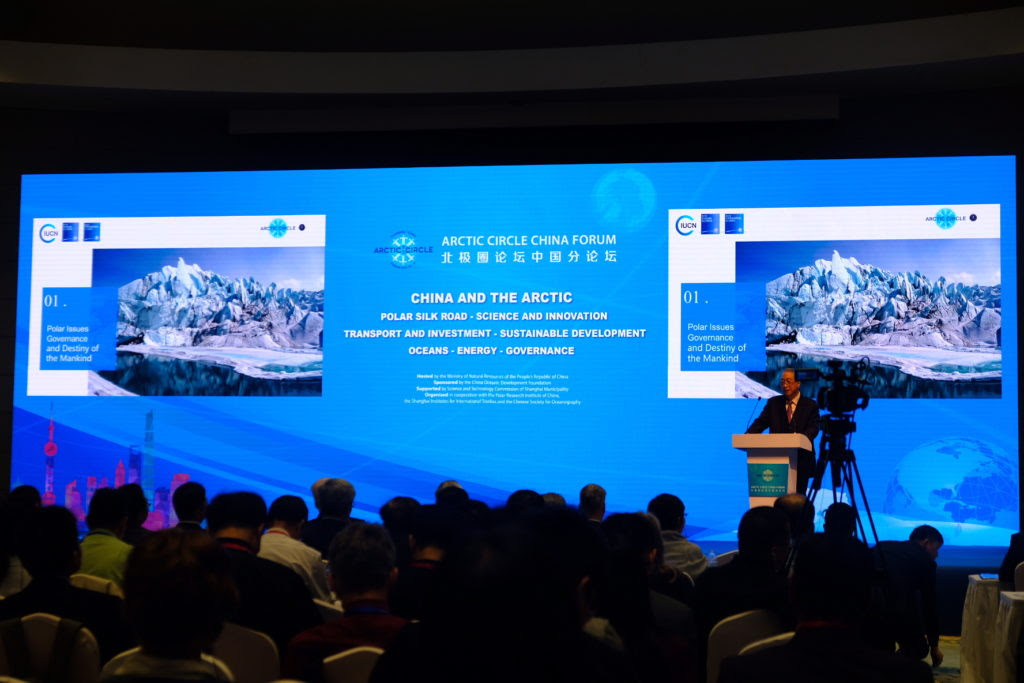 H.E. Zhang Xinsheng, President, International Union for Conservation of Nature, addresses the Arctic Circle Forum in Shanghai on May 10, 2019.

In the Russian Arctic, construction on the second and third trains of the Yamal LNG project, to which Chinese investors have lent $15 billion, happened a year ahead of schedule. Yamal LNG now supplies 5% of the world’s liquefied natural gas. Forthcoming projects in the area like Arctic LNG 2 are set to further increase the amount of natural gas sucked out of the Yamal Peninsula – a region that thousands of Nenets reindeer herders (an Western Siberian people, as opposed to the aforementioned Evenki, who are an Eastern Siberian people) still call home. Wang Haiyan, PetroChina International’s General Director, offered in a characteristically baroque turn of phrase:

“The Yamal LNG project, the Arctic LNG 2 project, and many other projects will prove to be the dazzling pearls on the Polar Silk Road.”

More than just impress with megaprojects, Chinese companies are also venturing into the nitty-gritty world of polar logistics. In his presentation, Captain Meijiang Cai, a senior director from China Shipping and Sinopec Suppliers, explained how COSCO has operated 22 commercial voyages through the Arctic. These transits have endowed some 360 crew members with experience sailing in polar waters. Underscoring his point, Captain Cai showed a picture of two polar bears clinging to an iceberg, the type of image iconic of Arctic climate change, noting, “This photo was taken by our crew, so we have to pay attention.”

What was perhaps most surprising in the captain’s talk was not the numbers, but rather his call for more regulation of Arctic shipping. The Chinese captain explained, “We believe that the security of the Arctic Northeast Passage needs to be strengthened. In particular, related water depth data, navigation facilities, icebreaking pilot services, emergency assistance capabilities, and the application of relevant laws and regulations still require the joint efforts of the international community to explore and strengthen.” He urged:

“We need to introduce an ‘Arctic Integrated Governance Law’ that transcends national, regulatory and industrial boundaries, including the construction of an emergency assistance system with international cooperation.”

Earlier this week, U.S. Secretary of State Mike Pompeo mindlessly asked, “Do we want the Arctic Ocean to transform into a new South China Sea, fraught with militarization and competing territorial claims?” The answer, even to China, is no. The country's representatives have repeatedly made it clear that Beijing does not grasp at any territorial claims in the Arctic.

It might be wise, however, to keep an eye on the solutions Chinese officials propose to the Arctic, from the suggestion by Yao Zhang in The Global Times last month for an "Ice Silk Road" framework that could "represent a new direction for future Arctic governance and cooperation" to Cai's call for an “Arctic Integrated Governance Law” when the International Maritime Organisation's Polar Codealready lays a solid framework for polar navigation.

In a sense, China may be trying to gradually shift norms in the Arctic away from their foundations in the West and instead towards the East. Chinese officials do this subtly when they talk repeatedly of the fragility of the Arctic’s “eco-environment” - an awkward but nonetheless distinctly Chinese phrasing - rather than using the more conventional “environment.” And they do this more directly in instances such as when Gao Feng remarked, “The Arctic calls for more environmental protection than any part of the world.” Certainly, the vulnerability of the polar environment means that stringent regulations should be put in place. But you'd probably want these same rules applied in your own backyard, too. Thus, the Arctic may represent an instance of global powers leveraging the climate crisis in order to rewrite the rules - all in the name of the environment rather than land-grabbing and flag-staking.

Pompeo’s swashbuckling fantasies aside, geopolitical competition in the contemporary Arctic is therefore not about who controls swaths of continents or oceans. It’s about who will write the new environmental regulations, the new guidelines for development finance, and the new rules on community consultations.

In 2007, Naomi Klein wrote a landmark book called The Shock Doctrine in which she introduces the concept of “disaster capitalism” to explain how private capital takes advantages of crises and collective traumas to find new opportunities for profit, whether it’s Hurricane Katrina or 9/11. Similarly, the climate catastrophe that is unfolding across the planet - and twice as fast as average in the Arctic - may be creating an opening for new legal and regulatory regimes to be put in place. This is not the stuff of newspaper headlines nor Donald Trump tweets. But it is the stuff that will shape the future of the Arctic.

In short, Shanghai’s future will undoubtedly be affected by Arctic climate change and all the sea level rise and polar vortices it sends down south. But it is the discussions in court rooms and conference halls from Rovaniemi to coastal China that increasingly determine how we navigate the fallout. 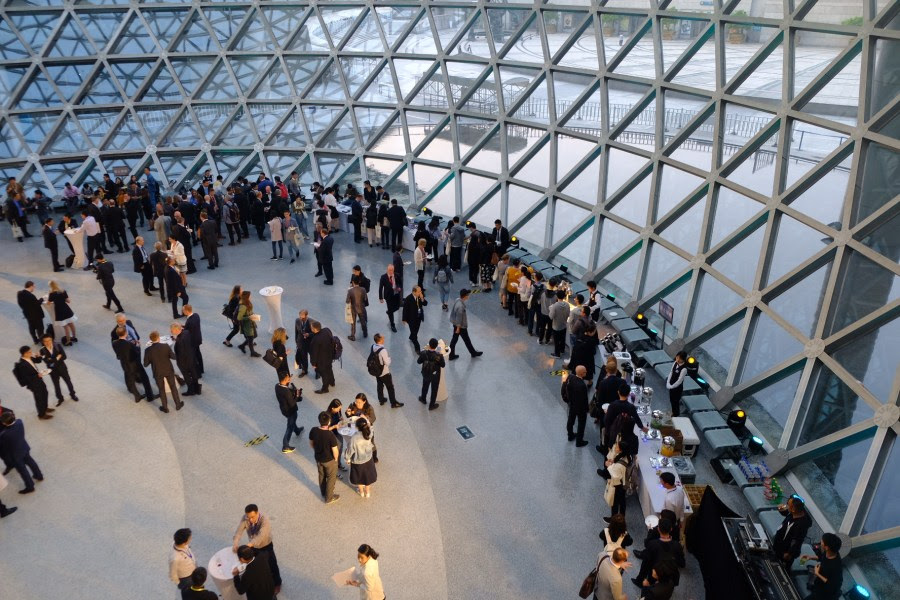