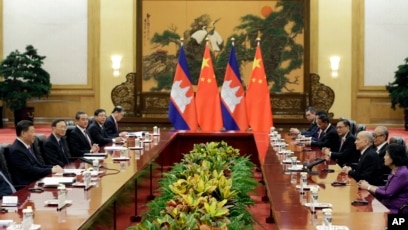 King Norodom Sihamoni told Chinese President Xi Jinping that Cambodia would further support his overseas investment strategy, which has been criticized by the U.S.

King Norodom Sihamoni is on a three-day visit to Beijing to attend the Conference on Dialogue of Asian Civilizations, which attracted hundreds of attendants from across Asia, including government leaders and heads of state.

He met bilaterally with Chinese President Xi Jinping, during which he said “his country stands ready to promote the Belt and Road Initiative with China,” Chinese media agency CGTN reported.

BRI is Xi Jinping’s signature foreign policy initiative and involves massive strategic investment in businesses and infrastructure across the globe, with an emphasis on developing countries in Asia and along the old Silk Road to Europe.

In recent years, Chinese investment in real estate, tourism and infrastructure in Cambodia has surged, often designated as a part of BRI. Investment has concentrated in the capital Phnom Penh and in the deep-sea port and beach resort of Sihanoukville, both of which have seen a glut of projects.

This has occurred as the Cambodian People Party (CPP) government increasingly turned toward China - and away from Western countries – to gain economic and diplomatic support for its long rule, which it extended last year after the main opposition party was banned from running in 2018 general elections.

Amid an intensifying global rivalry between Washington and Beijing, the United States government and lawmakers have sought to counter China’s growing economic and military influence. They warned developing countries that BRI is “a debt trap” laid by Beijing to realize its geopolitical ambitions.

Most recently, House Foreign Affairs Committee Lead Republican Michael McCaul noted that Chinese investment projects have a poor record of respecting workers’ rights, the environment and the sovereignty of other countries.

He said in a May 7 statement that “China’s Belt and Road Initiative is ensnaring developing nations into Chinese debt traps from which they may never escape. This effort is also leading to a new Chinese adventurism, complete with military outposts and expanded leverage in various countries.”

Chheang Vannarith, president of the Asian Vision Institute, a think-tank in Phnom Penh, played down the risks suggested by those in Washington, saying that these were outweighed by the economic opportunities offered to Cambodia by the large Chinese investment under BRI.

He said Cambodia should try to ensure that better quality and transparency in the Chinese investment, while the risk of growing indebtedness to China “depends on the negotiation and leadership capacity of Cambodia. [A] debt management strategy should be developed to sustainably and smartly manage debts.”