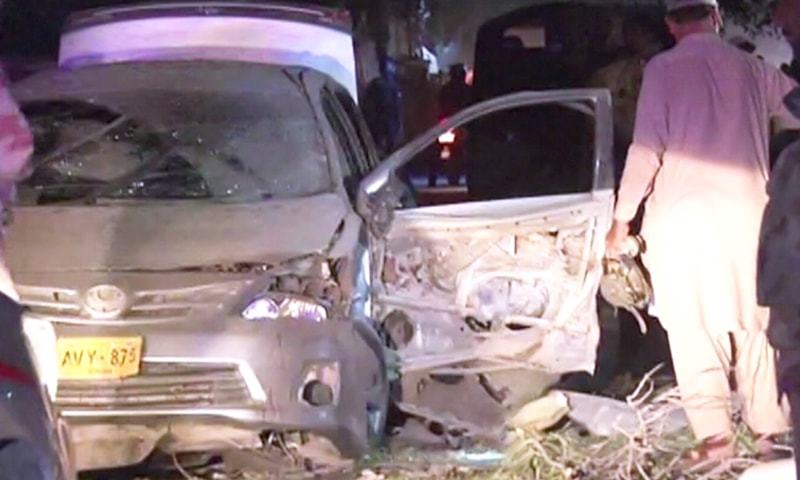 A vehicle was damaged in a blast in a market in Quetta's Satellite Town. — DawnNewsTV screengrab

Four policemen were martyred in a blast in a market in Quetta's Satellite Town, according to Quetta Deputy Inspector General (DIG) Police Abdul Razzaq Cheema.

The DIG said that two policemen and seven civilians have also been injured in the blast, while a police van was also damaged.

The injured are being shifted to the Civil Hospital, where an emergency has been imposed. Meanwhile, security officials have arrived at the area and cordoned it off.

The nature of the blast has not yet been determined and it is not clear if it was a targeted attack.

PML-N President Shahbaz Sharif condemned the blast in Quetta, saying that "by targeting Balochistan multiple times the enemy has made its intentions clear."

Sharif said "the surge in terrorism incidents is worrisome."

He paid tribute to the security officials for "risking their lives in defence of the country and its people".

"The entire nation stands determined until the eradication of terrorism," he added.

It is the fourth act of violence in the country since the holy month of Ramazan began. On May 8, five policemen were martyred in what officials described as a suicide bombing targeting an Elite Force van detailed to the security of the Data Darbar shrine in Lahore.

Later the same day, three people, including a tribal leader named Wali Khan Achakzai, were killed in a blast in Killa Abdullah.

Today's blast comes two days after a terrorist attack on Pearl Continental Hotel, Gwadar in which three people were killed while four were injured.