'Time to take difficult decisions': Asad Umar steps down as finance minister, will not hold any portfolio 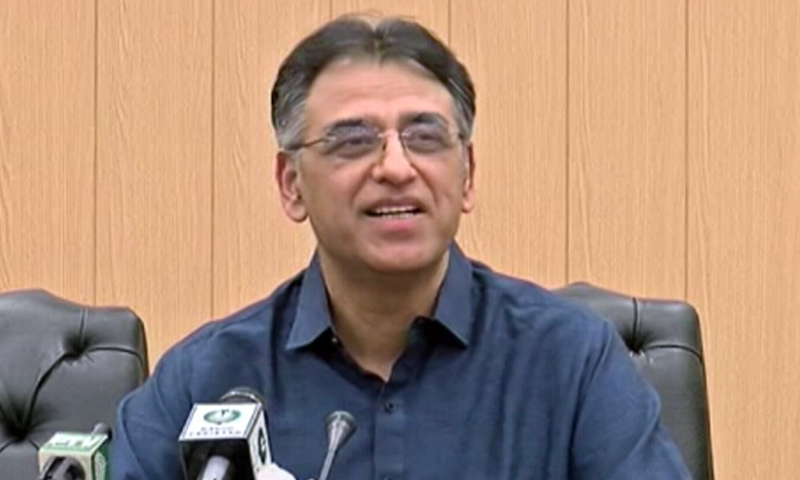 Asad Umar, who stepped down as finance minister on Thursday, addresses a press conference. — DawnNewsTV

PTI stalwart Asad Umar — an hour after announcing that he is stepping down as finance minister on Thursday — told a press conference that it was time to make some "difficult decisions" to stabilise the economy and that he hopes his replacement would be supported in their efforts.

Umar, via Twitter, announced earlier that he has obtained the prime minister's consent "to not take any cabinet position" days after reports of a reshuffle in the cabinet were rubbished by the Information Minister Fawad Chaudhry.

"As part of a cabinet reshuffle, [the] prime minister desired that I take the energy minister portfolio instead of finance," he said. "However, I have obtained his consent to not take any cabinet position."

Umar ended his tweet by saying: "I strongly believe @ImranKhanPTI is the best hope for Pakistan and inshAllah will make a naya Pakistan."

During the press conference, Umar, who kept an upbeat demeanour, said he was asked to take the energy portfolio following a reshuffle in the cabinet.

"I met the prime minister this morning and convinced him that I did not want to take any portfolio," said the PTI leader, who served as finance minister for eight months.

In response to a question about the earlier reports of reshuffling in the cabinet, he said: "I was first told [about this portfolio change] last night."

"I think, as per my discussion with the prime minister, other changes [in the cabinet] will be announced either tonight or tomorrow morning."

In response to a question about the earlier reports of reshuffling in the cabinet, #AsadUmar said: "I was first told [about this portfolio change] last night." "I think, as per my discussion with the prime minister, other changes [in the cabinet] will be announced either tonight or tomorrow morning." #DawnToday

"It was on exactly this date in 2012, when newspapers had announced that I was joining the PTI. Today seven years later, I am giving you this news.

"It has been a wonderful journey of seven years and I will continue this journey.

"I need to thank the PTI’s youth for their enthusiasm. I need to say that when we came in, the economy was in a dangerous and sorry state, we were standing near a ditch, one move and we would have been in the ditch. The state of the economy is still not great [and] the next finance minister that comes in will still have a hard time.

"What I want is that whoever comes in is supported when they make difficult decisions for the sake of the nation.

"I believe that this decision [appointment of finance minister] should be made as soon as possible [...] we are about to go to the IMF (International Monetary Fund), we are about to present the budget. This is already too late, the next person should have come in earlier, at least a month ago."

Asked whether there had been a conspiracy in the government to remove him, Umar did not give a definite answer.

"I came into politics so that I could do something for the betterment of the country. I don’t know if there has been a conspiracy or not [to remove me] but all I know is that my 'captain' wanted to see me in the role of the energy minister. I did not think that would be a great idea so I refused.

"We have finalised the IMF agreement on much better terms than before. It is the time to take difficult decisions; I have made these decisions, I refused to take the decisions that would have crushed the nation."

Read: 'This was always on the cards': Journalists and analysts react to Asad Umar's departure

Defending his performance amid a wave of criticism over the government’s handling of a financial crisis that has sent prices soaring, he said: "Who says that I have failed in achieving what I wanted to achieve? I had left my job to join the party [PTI] when we weren’t even in the parliament, let alone in the opposition. Look at how far we have come from that. I am not letting PTI go, I truly believe that 'Naya Pakistan' will become a reality.

"The new team will come and it will look at things with fresh eyes, maybe they will come up with better decisions and either way, they will need to be given time.

"This is not a decision made in protest. When I had joined the party, we were sitting at Khan sahab's sister’s place, and I had told him that 'there is nothing you have that you can offer to me in return for doing this, so I am a person who is going to think and act freely.'

"The new person that comes in may have a different approach, but they will have to work on the same five-six points [to improve the economy]. There are three main deficits that need to be fixed in order to fix the economy."

Answering another question, he said: "The amnesty scheme has nothing to do with my leaving the post."

It is unclear whether Umar has officially submitted a resignation, and whether it has been accepted.

In a video recorded soon after the news broke, Minister for Human Rights Shireen Mazari told reporters that she had no idea about the development. "I was just in a meeting and Asad Umar was the finance minister [in the meeting], so I have no idea if anything else has happened," she said.

PML-N leader and Umar's brother Mohammad Zubair while speaking to DawnNewsTV said he hopes "whoever comes now will take a running start and implement the things that need to be done."

Explore: Does the government possess the political skill to manage the adjustment process?

Journalist Meher Bokhari told DawnNewsTV that there is some disappointment over the news in Pakistan Tehreek-i-Insaf circles because Umar is admired and looked up to in the party.

Reports were circulating earlier this week about a possible reshuffle in the post for Minister for Finance and Minister of State for Interior held by Asad Umar and Shehryar Afridi respectively.

The government in general and the finance minister in particular have faced mounting criticism by opposition parties, members of the business community and citizens over the handling of the economic crisis.

The information minister, although he had not addressed the specific changes reported to the portfolios, had dismissed the reports, saying there was "no truth" to them.

The Pakistan Electronic Media Regulatory Authority had also issued show-cause notices to ARY News and Bol News for airing news items regarding the reshuffle in the cabinet and change in the portfolios of some federal ministers.

The development comes came days after Umar returned from talks in Washington with the IMF, during which the details of Pakistan's next bailout were finalised, documented and signed. An IMF mission is expected to visit Islamabad before the end of the month to work out technical tables since all major issues had been settled and documented, Umar had said.