This is not funny anymore': PM Imran's statement in Iran comes under intense opposition attack 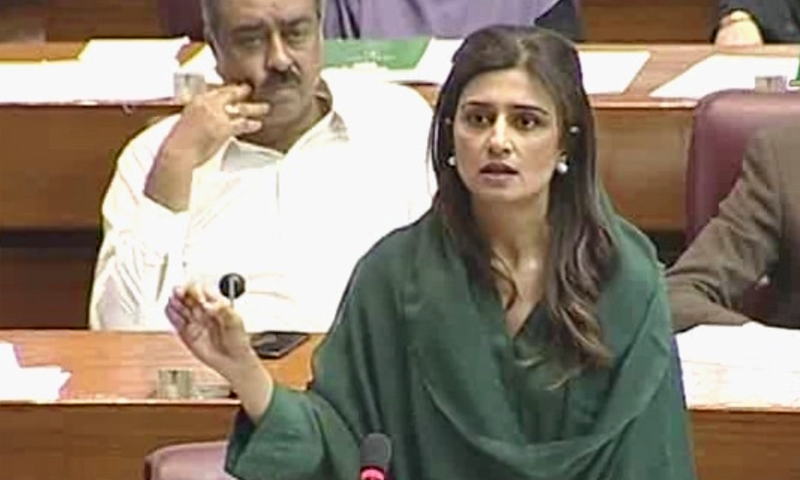 Prime Minister Imran Khan's public acknowledgement in Tehran that terrorists had in the past misused Pakistani territory to undertake attacks against Iran came under a blistering attack by the opposition in the National Assembly on Tuesday.

Human Rights Minister Dr Shireen Mazari defended the prime minister, saying his statement was being quoted out of context.

In an unprecedented, albeit bold move, Imran, while speaking at a joint press conference with Iranian President Hassan Rouhani after a round of talks on Monday, had said: “I know Iran has suffered from terrorism [perpetrated] by groups operating from Pakistan. …we [need to] have trust in each other that both countries will not allow any terrorist activity from their soil. We hope this will build confidence between us.”

The rumpus started when PML-N MNA Khurram Dastagir Khan drew the attention of the house towards the reported statement of the prime minister regarding the use of Pakistan's soil against Iran.

"No prime minister has ever made such a confession on foreign soil," Dastagir said, adding that only a day earlier, "the foreign minister had stated that terrorists had entered from Iran to carry out activities in Balochistan."

He said the International Monetary Fund has already linked the bailout package for Islamabad with the findings of the Financial Action Task Force (FATF).

"Pakistan is exposed internationally by such statements," the PML-N lawmaker said.

He recalled that Imran had previously suggested that Indian Prime Minister Narendra Modi’s re-election could help in moving towards a settlement over occupied Kashmir, and alleged that the premier in a public meeting had said that "he could shake hands with Modi, but not the opposition". He also accused the prime minister of having said previously that the Pakistani military had created militants.

"The prime minister has committed diplomatic blunders," the PML-N leader alleged. "Through his statements, the [premier] has hurt national security."

He said the opposition was not terming Imran "a traitor", but only asking that he needs to come to the house to give an explanation.

PPP MNA Hina Rabbani Khar, who has previously served as the country's foreign minister, was unforgiving in her criticism of Prime Minister Imran's statements.

"We are worried for the country after seeing it continually become a laughing stock," she said. "This is not funny anymore. You cannot play with the destiny of this country anymore."

She said although the premier had publicly talked about the use of Pakistani territory against Iran in the past as well, other people who had said "much less severe things" were "ousted from the country [and] cases were filed against them and their right to be elected was taken away".

"You cannot make these stupid statements and expect us to stand behind you," Khar said.

She claimed that people had been declared "traitors" for engaging with Indian prime minister in the past, but now Prime Minister Imran was "endorsing that if [Modi] is re-elected the Kashmir issue would be resolved".

"Where is your sense of history?" she asked the premier. Khar also criticised his statement regarding an interim set-up in Afghanistan, saying any interference in the internal affairs of another country is "not sophisticated diplomacy".

Addressing the house, Human Rights Minister Mazari said the opposition had quoted only one part of the premier's statement.

She said that after acknowledging that Pakistan's soil had been used for terrorist activities in Iran in the past, the prime minister had clearly stated that terrorists had recently come from Iran to carry out attacks in Balochistan.

She stressed that the prime minister had stated that both Pakistan and Iran will have to take action against banned organisations operating in their bordering regions.

Responding to the opposition's criticism of Imran's statement regarding Modi's re-election, Mazari turned her guns on the PML-N's supreme leader, recalling that Modi had in the past visited the Raiwind residence of the Sharifs and that former prime minister Nawaz Sharif had refused to meet All Parties Hurriyat Conference (APHC) leaders even though he had attended the oath-taking of Modi in India.

She also dismissed criticism on Prime Minister Imran's statement erroneously stating that Japan and Germany as neighbours, saying it had been a "slip of the tongue" and that he had intended to mean France and Germany.

But Khar remained unconvinced, saying while the minister had termed Imran's statement about Germany and Japan a slip of the tongue, the premier had talked about it in detail.

"He doesn't know that Japan is in Asia and Germany in Europe," the PPP lawmaker alleged.

Deputy Speaker Qasim Suri then gave the floor to Communication Minister Murad Saeed, but the opposition members took the opportunity to start protesting loudly. They demanded that instead of Saeed, the prime minister should himself come to the parliament to make a statement.

The opposition gathered in front of the speaker's dais when he allowed the minister to continue. They kept shouting "no baby no" as a way of mocking Saeed, and "go Niazi go" in reference to the prime minister throughout Saeed's address.

Saeed in particular targeted PPP chairman Bilawal Bhutto-Zardari in his speech, which could not be heard clearly in the galleries due to the opposition's noisy protest

He alleged that when the Pakistani armed forces and the prime minister were busy discussing a strategy to deal with Indian aggression in Balakot, "Bilawal was pleading India's case".

"It is shameful that the young PPP chairman was using poisonous language against his own country at a time when our jets were responding to Indian aggression," Saeed said, adding the remark that Bilawal had become his party's chairman "accidentally".

"You appointed Hussain Haqqani as ambassador to the US. Even today, he is making statements against the country," he said, addressing the PPP leadership.

"When they are asked about [why they are in the ownership of] fake bank accounts, they [the PPP leaders] start talking against Pakistan. The whole family is involved in corruption — Bilawal, his father and aunt. They all have looted the public money and deprived the people of Sindh of their rights.

"Instead of building roads, hospitals and schools in Sindh, they transferred the looted money abroad," the minister alleged.

Saeed was still speaking amidst the opposition protest when the deputy speaker suspended the proceedings for Zuhr prayers.