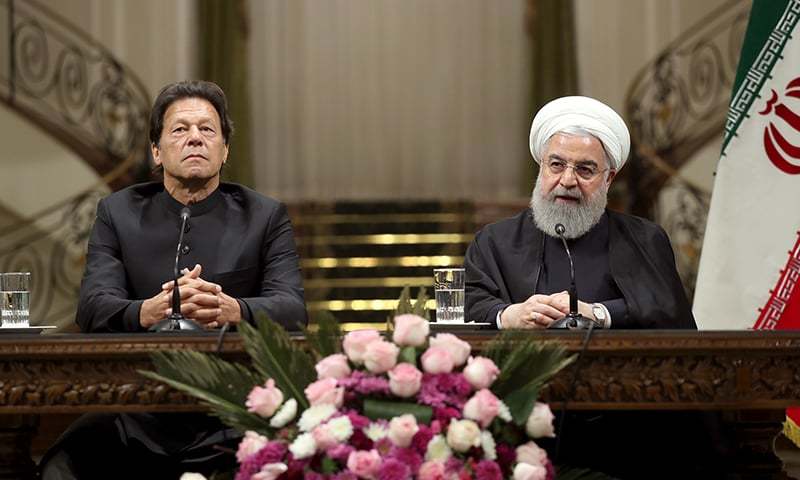 During their meeting, Prime Minister Imran — who is on a two-day official visit to Iran — discussed the entire spectrum of bilateral relations and ways to further ties in diverse fields with President Rouhani, Radio Pakistan reported.

463 people are talking about this

Prime Minister Imran later held a joint press conference with President Rouhani, during which he stated that he fears terrorism could become "a divisive part of the two countries' bilateral relations and increase differences between the countries".

He said that the most important agenda item for his visit to Tehran was "the issue of terrorism".

The premier noted that Pakistan had "probably suffered more from terrorism than any other country, with over 70,000 lives lost in the past 12-13 years".

He said that the security agencies of Pakistan must be appreciated for the way they tackled and overcame terrorism in Pakistan.

"We are much luckier than Afghanistan, where despite all Nato strength and despite the Afghan security forces, they could not overcome militancy the way we did in Pakistan," the premier said.

He further said that the entire political spectrum in Pakistan had come to the conclusion that no militant groups would be allowed to operate from the Pakistani soil.

PM Imran said that, for the first time, the current government was dismantling militant groups across the country. He said that this was not due to any outside pressure, but the result of a decision made through consensus across the political spectrum in Pakistan that the country will not allow its soil to be used by anyone against anyone.

The chief executive also brought his counterpart's attention to the April 18 terror attack in Ormara, in which 14 armed forces personnel were martyred. He said he understands that Iran had also suffered from terrorist attacks by groups operating within Pakistan, but stressed that the issues need to be resolved before they push the two countries apart.

He suggested that the Pakistani "security chief" will sit with his Iranian counterpart and discuss ways of cooperation so that the countries, "reach a level of trust such that both countries will not allow any terrorist activity from their soil".

"We hope that this will build confidence between us; it will help build a future relationship where we have complete confidence in each other," the prime minister said.

"I feel very strongly that the only way is not a military resolution — it is not through force, but through dialogue and a political settlement," the premier said.

He added that the whole subcontinent can move forward once Kashmir was settled. "Justice will bring peace," the premier reiterated.

The premier noted that cooperation between the two countries and ways to improve trade had been also discussed.

Iran and Pakistan also agreed to set up a Joint Rapid Reaction Force to guard common borders, according to Radio Pakistan.

The prime minister also thanked President Rouhani for the hospitality and respect the Pakistani delegation had received during their visit to Iran.

President Rouhani, while addressing the press conference, said: "Unfortunately we witnessed some tensions in border areas in the recent past, where terrorists perpetrated their nefarious acts."

He noted that, during the talks, both countries had reaffirmed their commitment to peace and security in the region. "We also emphasised that no third country should be allowed to harm the brotherly and close relations between the two countries," the president added.

As per Radio Pakistan, Rouhani said that the two countries have agreed to bolster their trade and economic relations and have agreed to set up a barter committee for the exchange of goods.

He said that Iran was also interested in establishing links between the Gwadar and Chabahar ports in order to strengthen commercial relations.

Prime Minister Imran also held a meeting with the representatives of Iran's business community, where he stressed on the need for increased bilateral trade.

"But unfortunately, Pakistan, Iran, India and Afghanistan have a very low proportion of trade with their neighbouring countries. And this reflects in our standards of living not reaching the levels where they should be.

"Iran has 80 million people, Pakistan has 210m people. They should be big economies but for a variety of reasons we have been unable to fulfill our trading potential.

"Despite the fact that Iran has sanctions and Pakistan is also going through a difficult period, we should now start developing our bilateral trade. It's time that we work out ways to enhance our trade."

The prime minister had arrived at the Presidential Palace early in the day, where he was received by the Iranian president. The national anthems of both countries were played during a welcoming ceremony, after which Prime Minister Imran was presented a guard of honour.

The premier is visiting Iran in a bid to strengthen trust between the two neighbouring countries. He was invited by President Rouhani.

The premier had reached Iran on Sunday and paid his respects at the shrine of Imam Raza during a brief stopover in Mashhad. He also met the leadership of the Khorasan-i-Razavi province, and told them that maintaining good relations with neighbours was the cornerstone of his government's policy.

Mr Khan was initially scheduled to visit Iran in January, but the trip was reportedly postponed at the eleventh hour due to unexplained reasons. The Foreign Office had simply issued a statement highlighting that Pak-Iran relations were "marked by close historic and cultural linkages and strong people-to-people exchanges".

The relations have, however, also experienced downswings due to security issues along the border areas.

According to diplomatic sources, border security issues will be on top of PM Khan’s agenda in Tehran, especially the April 18 terror attack in Ormara in which 14 armed forces personnel were killed.

Following the massacre, the Ministry of Foreign Affairs (MoFA) had lodged a strong protest with Iran over its inaction against the terror groups believed to be involved in the Ormara killings.

In a letter written to the Iranian embassy on Friday, the MoFA stated: “Killing of 14 innocent Pakistanis by terrorist groups based in Iran is a very serious incident that Pakistan protests strongly.”

Media reports said 15-20 terrorists camouflaged themselves in Frontier Corps uniform, barricaded the road and stopped three to four buses travelling from Ormara to Gwadar on the coastal highway at Buzi Top before dawn on April 18.

On the identification of the passengers, 14 personnel belonging to the armed forces were shot dead, including Navy, Air Force and Coast Guards personnel.

According to the ministry’s letter, “BRAS” — an alliance of three terrorist organisations — claimed responsibility for the terrorist act. The government said the terrorists had arrived from the border region and returned to the area following the incident.

Among other important issues, including border security, the Pak-Iran Gas Pipeline project is also expected to come under discussion between the two sides.