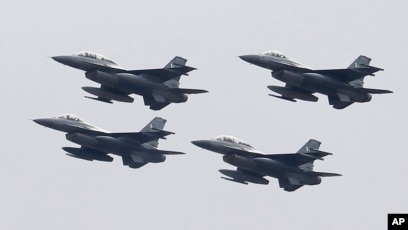 Anjana Pasricha contributed to this report from New Delhi.

ISLAMABAD — Pakistan warned Sunday that rival India is planning to launch a fresh military assault against the country, calling for the international community’s urgent diplomatic intervention to deter New Delhi from endangering regional peace and stability.

“We have reliable intelligence that India is planning and preparing to carry out another military aggression against Pakistan. This action could possibly take place between the 16th to the 20th of April.” Foreign Minister Shah Mehmood Qureshi said.

He told reporters in the southern city of Multan that Pakistan has formally shared the “authentic information” and conveyed its “apprehensions” to diplomats in Islamabad representing the five permanent member countries of the United Nations Security Council.

“We want the international community to take notice of this irresponsible behavior and warn India against treading this path,” Qureshi stressed. The Indian Foreign Ministry said in a statement that “this public gimmick appears to be a call to Pakistan-based terrorists to undertake a terror attack in India.”

New Delhi called on Pakistan to take credible steps against terrorism operating from its territories rather than “making hysterical statements to obfuscate the core issue that bedevils our region: cross border terrorism."

The Pakistani warning comes amid simmering tensions since Feb. 26 when Indian jets crossed deep into Pakistan territory and allegedly destroyed the suspected training camp of a militant group New Delhi accuses of plotting terrorism in the divided Kashmir territory.

Pakistani officials refuted Indian claims of hitting any “camps” or “killing a large number of militants” in the Balakot district before undertaking its own retaliatory military action the following day. In the ensuing dogfight over Kashmir, Pakistani fighter planes shot down an Indian fighter jet and arrested its pilot.

The aerial clash had fueled fears at the time of a wider conflict between the two nuclear-armed neighbors. But international diplomacy and Pakistan’s decision to release the pilot to India two days later effectively defused the threat. American defense officials have reportedly refuted India’s assertions that its fighter jets had also downed a U.S.-made Pakistani F-16 aircraft in the dogfight.

Pakistani and Indian troops have continued to fire over the ‘Line of Control’ or the de facto Kashmir border, causing casualties on both sides since late February.

Islamabad denies allegations that it is fuelling a 30 year separatist insurgency in the predominantly Muslim region that both the countries claim in its entirety and has been the primary source of mutual military tensions.