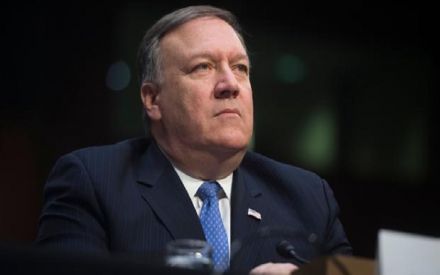 Chinese infrastructure and connectivity projects around the world have an element of "national security" and are less of an economic offer for host countries, US Secretary of State Mike Pompeo has said as Beijing is gearing to host the second Belt and Road Forum. The One Belt One Road OBOR, also called the Belt and Road Initiative (BRI), is a multi-billion-dollar project focused on improving connectivity and cooperation among countries in Asia, Africa, China and Europe. Pompeo Thursday told a Washington audience that China poses security threat to the US, its friends and allies.

“They’re moving into the South China Sea is not because they want freedom of navigation. Their efforts to build ports around the world aren’t because they want to be good shipbuilders and stewards of waterways, but rather they have a state national security element to each and every one of them,” Pompeo said in conversation with Rich Lowry at the National Review Institute’s 2019 Ideas Summit. The Belt and Road Initiative (BRI) is no different, he asserted.

“We’ve said this every place we’ve gone, if you talk to any of our ambassadors or our charges, they will tell you we are happy to compete on a fair, transparent basis under rule of law with the Chinese anywhere in the world. We’ll win more than our fair share, but we’ll lose some to them too,” he said.

“But when you’re showing up with a non-economic offer, whether that’s through state-facilitated, below-market pricing or handing someone something knowing that you can foreclose on their nation shortly, so predatory lending practices, that’s not straight and we are working diligently to make sure everyone in the world understands that threat,” Pompeo said.

India has been raising concern over the BRI’s China-Pakistan Economic Corridor (CPEC) as it is being built through Pakistan-occupied Kashmir (PoK). The 3,000-km CPEC is aimed at connecting China and Pakistan with rail, road, pipelines and optical fibre cable networks. India too cautioned specially the neighbouring countries about debt traps.

Apprehensions over the huge loans grew after China acquired Sri Lanka’s strategic Hambantota port on a 99-year lease as a debt swap. The world is waking up to this threat, the US secretary of State said.

“I think Asia and Southeast Asia in particular are waking up to this risk, and I hope the State Department can continue to be a part of making sure that they see that, identify it, and that it becomes more difficult for the Chinese to engage in these practices,” Pompeo said.

Pompeo’s comments came as China is getting ready to hold the second Belt and Road Forum (BRF) next month. India boycotted the first BRF meet held in 2017 as Beijing went ahead with the CPEC with Pakistan.

Chinese Foreign Minister Wang Yi told an annual media briefing here this month that the BRF meeting to be held in April would be bigger that that in 2017 with more international participation. Wang refuted the criticism from the US, India and several other countries that the BRI is driving smaller countries in debt traps. The BRI is not a “debt trap” that some countries may fall into but an “economic pie” that benefits local population, Wang claimed