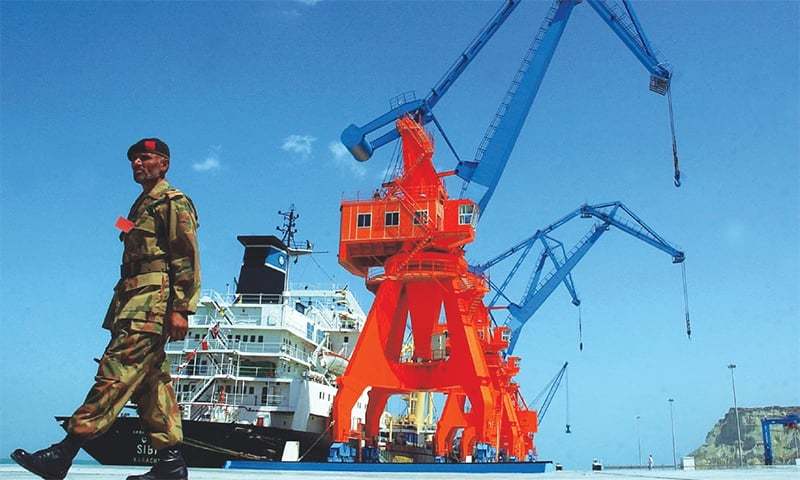 The special committee, headed by Senator Sherry Rehman of the PPP, will also receive a briefing on “laying of fibre-optic cable along the CPEC routes”. — AP/File

ISLAMABAD: A Senate special committee on China-Pakistan Economic Corridor (CPEC) will meet here on Friday (tomorrow) to review a number of projects. The committee will also get a briefing on investments being made by Saudi Arabia and the United Arab Emirates (UAE) in Gwadar.

According to the agenda of the meeting, the special committee, headed by Senator Sherry Rehman of the Pakistan Peoples Party (PPP), will also receive a briefing on “laying of fibre-optic cable along the CPEC routes”.

CPEC: The devil is not in the details

The committee members will receive a briefing from the officials concerned on the “latest position of investment by Saudi Arabia and the United Arab Emirates in Gwadar’s Oil City,” according to the agenda.

During the visits of UAE Crown Prince Sheikh Mohammed bin Zayed Al Nahyan in January and Saudi Crown Prince Mohammad bin Salman last month, the two countries had made pledges to make investment in the oil sector, particularly in Balochistan. Saudi Arabia plans to set up a petro-chemical complex at Gwadar’s Oil City.

A Saudi delegation, headed by Energy Minister Khalid Abdul Aziz Al Falih, had visited Gwadar in January to inspect the site for the proposed oil refinery.

Ghulam Sarwar Khan, the federal Minister for Petroleum and Natural Resources, had met the Saudi delegation in Gwadar.

Describing the proposed refinery as a “state-of-the-art facility”, Ghulam Sarwar Khan had reportedly stated that it would be the biggest investment by Saudi Arabia in Pakistan.

The members of the Senate special committee are also set to receive a “comprehensive briefing on SMEs (small and medium enterprises) and SEZs (special economic zones) to be set up as part of CPEC projects”.

Chairing a meeting to review progress on CPEC projects on Jan 18, Prime Minister Imran Khan had prioritised four key areas under CPEC for the next couple of years and ordered the ground-breaking of at least three special economic zones before the end of June.

The meeting had been told that four SEZs — Rashaki in Khyber Pakhtunkhwa, Dhabeji in Sindh and M-3 Faisalabad and one in Islamabad — would be developed in the first phase and three of them — Rashakai, Dhabeji and Faisalabad — would be ready for ground-breaking by June.