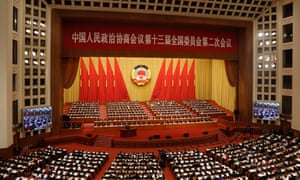 China’s largest political event of the year, a meeting of legislative delegates and political advisers known as the “two sessions”, gets under way this week and comes at a time when Chinese leader Xi Jinping faces one of the most challenging periods since coming to power.

Thousands of delegates will descend on the Great Hall of the People in Beijing while authorities go into overdrive to prevent any semblance of dissent during the two weeks of meetings of the nearly 3,000-strong National People’s Congress (NPC) , and the Chinese People’s Political Consultative Conference (CPPCC), an advisory body.

Xi faces public scrutiny against the backdrop of a slowing Chinese economy, a bruising trade war with the US, heightened international concern over Chinese tech firm Huawei, and growing global criticism over Chinese policies in Xinjiang. 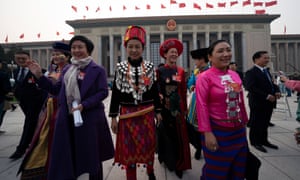 Delegates from ethnic minorities leave the Great Hall of the People in Beijing, China, on Sunday. Photograph: How Hwee Young/EPA

The annual meeting is nicknamed the “two sessions” because both the NPC and the CPCC meet. The NPC, a legislative body, is often described as a “rubber stamping” parliament whose function is mainly ceremonial.

During the meeting, NPC delegates will ratify legislation, personnel changes and the government budget – all of which have been largely approved beforehand. Delegates include not only government officials but also business executives and celebrities like Tencent founder Pony Ma, actor Jackie Chan, and former NBA player Yao Ming.

Most laws are made by the NPC standing committee, which runs the legislature and passes laws throughout the year. The legislature, which has been meeting since 1954, has never voted down a proposed law. But there have been instances of dissent. In 1992, only two thirds of delegates voted in favor of China’s controversial Three Gorges Dam infrastructure project.

Before major political events, security in Beijing is often tightened with human rights activists put under surveillance or “travelled” outside the capital. Hu Jia, an environmental activist based in Beijing, has been under house arrest since 26 February and was told by public security that he would be taken south to Guangdong during the meeting, and returned likely on the 16 March, after the two sessions concludes. 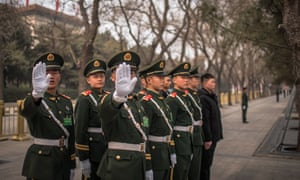 Chinese soldiers gesture towards the photographer as they stand guard in front of the Great Hall of the People. Photograph: Roman Pilipey/EPA

“It happens every year. It’s not a strange thing. It’s called being placed under control, or being travelled, or placed under home arrest,” Hu said, before the annual meetings had begun.

Hua Yong, an artist and dissident in Beijing, posted a poem on Twitter: “They will hold a meeting in Beijing … Public security enthusiastically sees me off … goodbye friends, goodbye Beijing.”

Residents and commuters have noted the increased security measures throughout Beijing, with more police visible on the transport system. Commuters coming into Beijing by train said their bags were checked several times and women were forced to send any bottles of perfume back home. Since 3 March, citizens have been barred from sending anything into the sky, from lanterns to balloons. Virtual private networks (VPNs) used to access blocked sites like Google also came under fire as users struggled to connect to services like Express VPN.

Citizens have been conscripted as volunteers for neighbourhood “stability control”. Elsewhere in China, officials also increased security measures. Notices posted in Xingyang in Henan province advised residents of the beginning of “war time” security mechanisms during the session.

Debate among delegates, scholars, and political observers will be even more constrained this year. Notices ahead of the meeting instruct party members on the “right way to build the party” banning over-the-top praise of the party as well as criticism. 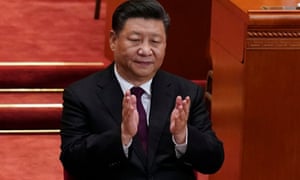 “People can’t talk normally, and now even this kind of expression is forbidden. It shows this is a very sensitive period,” said Zhang Lifan, a historian based in Beijing who follows elite Chinese politics.

“I’m afraid party committees have taken many preventive measures, to prevent any sensitive speech that can lead to a chaos during the meeting.”

He believes discussion of economic issues and the trade war are inevitable. “I think there will still be some ways of talking about the political system, not in direct ways, but using the economy,” he said.

On Tuesday, Chinese premier Li Keqiang will deliver a report to NPC delegates, announcing the country’s GDP target. Analysts expect this year’s target to be lower, between 6% to 6.5%, which would signal China’s ability to accept slower growth while continuing reforms to root out financial risk caused by debt.

Observers expect a new foreign investment law to be approved, aimed at addressing concerns from the US over intellectual property theft. According to draft versions, the law should ban local governments from forcing foreign companies to transfer technology to domestic firms.

There are signs the NPC has gained importance under Xi. Before 2014, the NPC only very occasionally approved significant legislation, according to Changhao Wei, a law student at Harvard University who runs the NPC Observer blog. Most major laws would be made by the more powerful NPC standing committee, which approves laws year round. If the foreign investment law is ratified at this session, this year would be the fifth year the NPC has approved a major piece of legislation.