Balochistan has only 5pc representation in NA’ 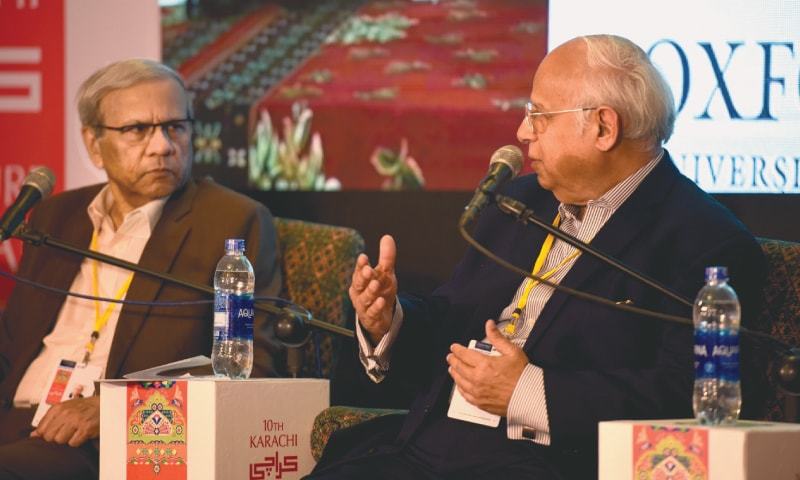 KARACHI: An interesting discussion transpired in a post-lunch session moderated by Huma Baqai on ‘The sorrows of Balochistan’ on the last day of the 10th Karachi Literature Festival at a hotel here on Sunday.

Ms Baqai put the first question to Kaiser Bengali about what the word ‘sorrow’ stood for in the title of the session. Mr Bengali replied that it was to do with institutional neglect. Balochistan makes up of 44 per cent of the country’s geography yet the state has failed to give it its due.

Mujahid Barelvi said it was during Z. A. Bhutto’s tenure that he joined journalism. He did not want to go into the previous acts of rebellion that had taken place in the province, beginning with 1948, and instead wanted to focus on the 1970s movement when the Hyderabad conspiracy case was going on and Mr Bhutto put Baloch leaders into jail. The basic problem of the region is that of resources. The gas that was discovered in Balochistan in the 1950s was supplied to the rest of the country but not to the province where it was discovered.

‘Sorrows’ of the province highlighted at KLF

Ikram Sehgal responded to the query whether the people of Balochis­tan have felt that change is afoot in the province for the better and their grievances have been redressed.

He said his first memory of Balochistan was when he was six years old and his mother would take him from one place to another on a bicycle. Then came the time when he took part in the counter-insurgency operation in the 1970s. He was sent to the Governor’s House to secure it and Governor Bizenjo came out. He was calm.

The governor asked him [Sehgal] the purpose of his visit, to which he responded that he was there for his security. The governor laughed.

After knowing that he was there for an hour or so, the governor offered him a cup of tea. The gesture got Mr Sehgal’s admiration because here was a man who knew he was going to be removed. He [Seghal] did not know that Mr Bugti was coming in. Mr Bizenjo left with just one suitcase. That gave him the impression that something was not right. But as a young army officer he could not question orders. And the orders came from the political leadership, which had decided that the governor would be removed.

Mr Sehgal said he would now fast forward to what he saw at Davos with Jam Kamal. When he was asked a question by someone, Mr Kamal said that he is the elected chief minister of Balochistan representing Pakistan.

📌Moving on Mr Bengali said Balochistan’s sorrows have to do with the state which to date is using one faction against the other — it has become a norm.

With regard to Gwadar, Mr Bengali said ➡even today Balochistan is getting 15 per cent gas. Pricing is also an issue.

📌He said 200km north of Balochistan there is no water. The water that is brought to Gwadar is brought by tankers. The situation in Gwadar and Pasni is such that when dacoits come to the houses in those areas, all they steal from them is water.