Saudi Crown Prince to Announce $20B Investment Projects in Pakistan 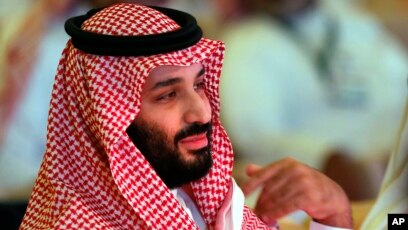 Saudi Arabia’s crown prince, Mohammed bin Salman, is set to make his first state visit to Pakistan on Saturday, where he is expected to announce investment projects worth up to $20 billion, a senior official told VOA.

The unprecedented Saudi investment is being viewed by Prime Minister Imran Khan’s nascent government as a major boost for cash-strapped Pakistan, which is facing an economic crisis and balance of payments pressure.

It will also send a strong message to other international investors to come to Pakistan, said Haroon Sharif, who chairs Pakistan’s Board of Investment, (BoI) which promotes and facilitates investors.

“At this stage, we are expecting serious Memorandums of Understanding [for concrete projects] between $15 billion to $20 billion worth of investments from Saudi Arabia in the area of oil refining, petrochemicals, energy sector, alternate energy and the mineral sector,” Sharif told VOA. However, these number are subject to technical feasibilities, he emphasized.

The Saudi prince, often referred to as MBS, will be accompanied by a high-powered delegation, including members of the royal family, key ministers and leading businessmen. He will hold meetings with Prime Minister Khan and other top officials, as well as Pakistani military leaders.

Sharif said that the anticipated Saudi investment includes an oil refinery to be established in the southwestern coastal city of Gwadar, where China has built a seaport as part of its global Belt and Road Initiative. The proposed refinery is estimated to cost around $10 billion.

Officials say the refinery will be in place “in 3-5 years” and it will help meet Pakistan’s needs of refined oil products, which it currently imports. The surplus, they say, will be exported from Gwadar to other buyers.

Pakistan has traditionally maintained strong political, cultural, economic and defense ties with Saudi Arabia. The Saudi Kingdom hosts hundreds of thousands of Pakistani expatriates, and is a key source of oil supplies to Islamabad on deferred payments and cash grants to help Pakistan’s traditionally struggling economy.

Pakistani officials insist the Saudi intended investment has no strings attached to it such as asking Pakistan to send its troops to assist in Saudi war in Yemen.

In October, Riyadh said it would lend Pakistan $3 billion in cash and allow Islamabad to defer payments for oil imports worth $3 billion for a one-year period to support the country’s ailing economy. The money has already been deposited to the State Bank of Pakistan.

A Pakistani official said Prime Minister Khan has developed a “special relationship and friendship” with MBS and the two leaders have vowed to further deepen ties between the two countries.

Khan was among a few international leaders who participated in an investment conference Saudi Arabia hosted in October. The event was organized just days after the murder of Jamal Khashoggi, a Washington Post columnist, at the Saudi Consulate in Istanbul. Many foreign participants boycotted the conference to protest Khashoggi’s killing.

The United Arab Emirates, a staunch Saudi ally, has recently also offered a $6 billion package to Pakistan. Sharif noted that the UAE has also nearly finalized plans to establish an oil refinery in Pakistan with an anticipated production capacity of about 300,000 barrels. That project would require about $8 billion in investments, he added. FILE - Work in progress at a new international trade route near Havalian in Pakistan, Thursday, May 11, 2017. The work is part of a sprawling Chinese initiative to build a "new Silk Road" of ports, railways and roads to expand trade in a vast arc of countries across Asia, Africa and Europe.

Pakistan’s partnership in the U.S.-led “war on terror” after 9/11 attacks triggered a militant backlash in the South Asian nation, killing tens of thousands of people and causing losses to the tune of more than 100 billion dollars to national economy, according to official estimates.

Until now, neighboring China, a close ally of Islamabad, was the only country to invest in Pakistan, with around 20 billion dollars in energy as well as infrastructure projects over the past five years.