Remembering the sane voice from Balochistan 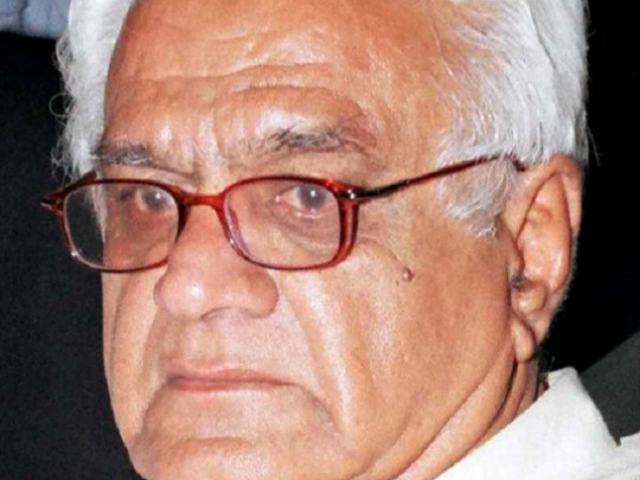 Today marks the first anniversary of veteran journalist, senior political economist and democrat Siddiq Baloch who died of pancreatic cancer last year in Karachi at the age of 78.

Baloch was an undisputed authority in Balochistan with a voice, deeply missed in the province today when it comes to solving political and economic matters. I was also amongst many journalists who are honoured and privileged to work under his leadership.

Baloch’s wide-ranging command of the issues was the envy of his fellow journalists, including me.

A colleague of mine, Malik Siraj, once said that if the conflicts in Balochistan ever came to an end, the journalists would fast run out of stories to cover. But such was Baloch’s mastery of all things related to the province that he would never run out of the related material.

Baloch made a point of visiting every town in Balochistan including the ones located inside the Iranian border. Whenever there were reports of an incident, even in the remotest towns, he was always able to share an anecdote from his own experience of being there.

“It is important for a journalist to travel the entire region and get first-hand information by interacting with local people and leaders,” he would say, with the usual characteristic broad smile on his face.

Baloch had published two newspapers, the English-language Daily Balochistan Express and the Urdu-language Daily Azadi. His daily work routine was very impressive. He would rise early in the morning, read the newspapers before heading out to look for news stories until 2pm. After a small nap, he would start to work again at 6pm and continue until midnight. The next day he would do it all over again.

“It is an insult for a journalist to be uninformed about what is published in the day’s newspapers,” Baloch used to say.

During his final days, the journalist was working on his memoir, sharing tales about his friends. Among these were former governor of Balochistan, late Mir Ghaus Buksh Bizenjo (he also encouraged him to get into journalism), former chief minister and governor Balochistan late Nawab Akber Bugti, late Nawab Khair Baksh Marri and former Balochistan chief minister Sardar Athaullah Mengal.

Baloch was such a larger-than-life personality that almost all politicians and bureaucrats knew him. They would be keen to have his opinion on matters of regional and national politics. However, despite his close connection to Balochistan’s political elite, Baloch struggled financially to run his newspapers. He had devoted himself to journalism but never made a fortune from it.

“Journalism will never make you rich,” he would say, “but you will earn enough money to feed your family.”

The existence of dummy newspapers in Balochistan is an issue. Over 300 newspapers and magazines are published in the province. Fewer than 15 of those are published daily, reach a wide audience, and maintain fully staffed offices in Quetta. Baloch’s newspapers were among those few. Not only he maintained a modern office he also regularly edited his English-language paper himself and wrote special reports for his Urdu publication.

Despite a Master’s degree in economics, and business acumen garnered over many years, Baloch often had to struggle to pay the bills to get his papers to press. As fellow journalists would observe, “Siddiq Baloch was a man who was widely known and appreciated beyond his newspapers.”

There were times when the outspoken journalist ran afoul of the government officials and the establishment. When this used to happen, the government advertising revenue, on which the financial survival of his newspapers was depended, would be withheld. This state of affairs represents the dilemma of newspaper editors and publishers working in the province. It is hard to imagine a free and independent press in Balochistan when newspapers have to rely on revenues from advertisements regulated and controlled by the government. A 17- grade government official would any time threaten Baloch with an advertising ban. But he always responded with calm, declaring “a newspaper cannot be filled entirely with pro-government content.” Despite the inevitable backlash he faced, Baloch continued to be critical of bad government policy.

Baloch was also seen as a mentor and friend to the younger generation. Students from remote areas of Balochistan, particularly journalism students, used to visit him and stay in his office.

Baloch’s late wife Mariam, a warm-hearted and generous soul, used to happily cook for dozens of people every day. She was fondly known by office staffers as ‘Madr-e-Millat (Mother of the Nation)’. In a male-dominated society of Balochistan, where the services of women are barely recognised, her name might also be forgotten one day.  But I strongly believe she played a crucial role in her husband’s success, both as a journalist and as a highly respected member of society.

Journalism academy to be named after Siddiq Baloch

In his final years, the ailing journalist could not afford his cancer treatment and had to resort to loans and government assistance, incurring debts that his family is still paying off. Baloch was aware that news from Balochistan rarely make headlines in the mainstream media and this served as a primary motivator for him, spurring him on even in his last days. “We have to make every effort to survive and tell our stories,” he once said and added, “Balochistan is a difficult place for journalists, but we have to persevere and do what we can.”

Baloch was a self-made man. He had no rich uncles to finance, nor did he hold any government position, yet he had different offers from political parties over the years. But in 1973, he served as a secretary to Bizenjo for few months. Baloch later had to spend four years in prison after the government was toppled by Pakistan Peoples Party the same year.

Baloch was a great journalist but more than that he was a great human being.  He was a man of integrity and a decent, honest, upright citizen who had the utmost respect for the law.

“I do not care what others are doing,” he would say. “Around here everyone must follow the law. I am a journalist. I preach about the supremacy of the law. If I do not respect the law myself and demand the same from those who work for me, what right do I have to criticise others when they do wrong?”

Given the strength of his character, his journalism and his comprehensive grasp of history, politics and infrastructure of Balochistan, it is hard to imagine if the vacuum left by the passing of Baloch is ever going to be filled.