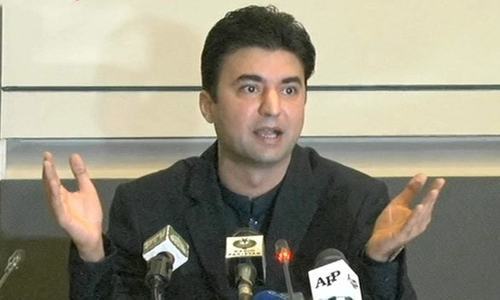 Murad Saeed claims funds for Sukkur-Multan motorway, on which a Chinese company worked with PML-N govt, were mismanaged. — File photo

Mr Saeed recently alleged that the PML-N government had signed a Memorandum of Understanding worth Rs259bn for the construction of the motorway, but later the cost was jacked up to Rs292bn due to financial mismanagement; thus, he said, the project suffered huge losses. He also accused the Sharif brothers, former minister for planning and development Ahsan Iqbal, and Javed Sadiq, CSCEC director in Pakistan, of being involved in the ‘scam’ and alleged that Mr Iqbal appropriated the cost differential of about Rs 70bn.

The CSCEC, in its rejoinder, says it has “profound respect for Pakistan and its people. In the spirit of win-win cooperation and benefiting the Pakistani people, we have been carrying out our business activities and all of our operations fully in compliance with Pakistani laws and regulations.”

The CSCEC release says that the corporation signed an MoU with the government of Pakistan in July 2013, envisaging a motorway connecting Karachi with Lahore. This, it claims, was a non-binding document and valid for a period of one year that expired on July 4, 2014, while the bidding process started in June 2015. This MoU, it explains, had no influence over the bidding process. After an open and transparent bidding process, the CSCEC was declared the lowest bidder, the rejoinder claims, maintaining that it is common in the international construction field for there to exist differences between the cost estimate provided in the feasibility study report and the bid price. It adds that the project is currently progressing smoothly and the 400km motorway is expected to be completed within three years.

Former minister for planning Mr Iqbal, when contacted by Dawn, termed Mr Saeed’s comments about the issue a dangerous effort to make the CPEC project controversial. “The naïve PTI government doesn’t even know that the monitoring of all CPEC projects was done by independent experts from both China and Pakistan.” The cost, he said, had escalated due to improved Chinese standards to make the project able to withstand natural calamities, maintaining that the project had been approved by the Executive Committee of the National Economic Council where all the provincial finance ministers are represented.