Blackwater Founder’s New Company Strikes a Deal in China. He Says He Had No Idea.

Erik Prince said he had “no knowledge or involvement whatsoever” of a deal by Frontier Services Group to build a training camp in northwestern China.CreditZach Gibson for The New York Times 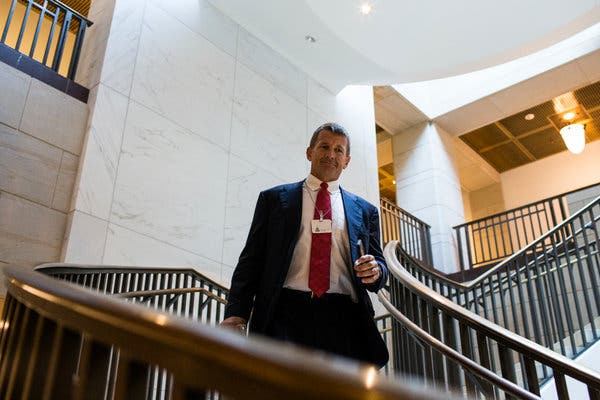 Erik Prince said he had “no knowledge or involvement whatsoever” of a deal by Frontier Services Group to build a training camp in northwestern China.CreditCreditZach Gibson for The New York Times

By Alexandra Stevenson and Chris Buckley

HONG KONG — Erik Prince, a former member of the Navy SEALs best known as the founder of the security contractor formerly known as Blackwater, has made it clear that he considers China a priority. He teamed up with one of China’s biggest conglomerates and set up a company that would help Chinese companies overseas.

But Mr. Prince scrambled on Friday to distance himself from the latest announcement: that his company, Frontier Services Group, had struck a deal to build a training camp in the northwestern Chinese region of Xinjiang, where hundreds of thousands of Muslims have been detained in indoctrination camps that have drawn condemnation in Washington and abroad.

Frontier Services Group said in January that it had reached an agreement with officials and an industrial park in Tumxuk, a city in western Xinjiang, to build a training facility there. The announcement provided few details about what kind of training would take place there, though the company cast the project as a move to help upgrade the city through tourism and infrastructure projects.

Chinese media later reported that FSG would invest about $600,000 into the camp and train about 8,000 people a year.

But on Friday, in a statement provided by a spokesman, Mr. Prince said he had “no knowledge or involvement whatsoever” of what he called a “preliminary memorandum.”

Mr. Prince added, “Any potential investment of this nature would require the knowledge and input of each FSG board member and a formal board resolution.”

You have 4 free articles remaining.

By Friday, the statement announcing the deal had been removed from the FSG website.

Mr. Prince, who is the brother of the United States education secretary, Betsy DeVos, has long courted controversy, most recently when he laid out a plan for President Trump to privatize the war in Afghanistan. Blackwater, a United States military contractor in two Asian conflicts, became a symbol of unchecked American power in the Iraq war after its employees killed 17 unarmed civilians in Baghdad in 2007.

Frontier Services Group has expressed interest in western China before. Two years ago, it said it would set up an office in Xinjiang, where the Chinese authorities have taken an increasingly hard line on the local population, citing concerns about terrorism. Xinjiang is home to a largely Muslim ethnic minority group called Uighurs.

Since then, a fuller, more disturbing picture has emerged.

Officials in Xinjiang have rounded up ethnic Uighurs and other Muslim minority groups in huge numbers, putting them into re-education camps where they are subjected to a severe indoctrination program to remove any devotion to Islam and make them obedient to the Chinese Communist Party. Experts, human rights groups, and officials in the United States and elsewhere estimate hundreds of thousands of people have been caught up in the campaign, part of an expansive crackdown that Beijing has put in place in the name of fighting extremism and separatism.

“Xinjiang is a region where we have documented severe human rights abuses both by the police and ordinary officials,” said Maya Wang, a researcher for Human Rights Watch. “Anything that would involve training government officials involved in this repression would be contributing to human rights abuses.”

United States officials have taken notice. Lawmakers have introduced bipartisan bills that urge the Trump administration to punish Chinese officials and to prevent sales of some American equipment to some Chinese state agencies. Officials at the White House and in the State and Treasury Departments have been discussing whether to impose economic sanctions on Chinese officials who oversee the system of repression in Xinjiang.

Mr. Prince made a name for himself as the founder of Blackwater, a private military contractor that did business in Iraq. After Blackwater employees were held responsible for civilian deaths in Baghdad, Mr. Prince sold the company and set up FSG, turning his sights to the growing demand from Chinese companies moving into countries and regions with ethnic strife.

FSG, which is listed in Hong Kong, has unabashedly courted Chinese officialdom. Citic Group, one of China’s biggest state-owned conglomerates, owns a quarter of FSG’s stock. A security and logistics company, FSG has tied itself to China’s Belt and Road Initiative, a major campaign by President Xi Jinping to develop geopolitical ties by building bridges, trains and ports through Asia. China considers Xinjiang, which borders Kazakhstan and several other Central Asian countries, a gateway to a strategically important region.

Tumxuk lies between Kashgar and Aksu, larger settlements that have been a focus of the Chinese government’s drive to stifle antigovernment sentiment. The city comes under the Xinjiang Production and Construction Corps, an organization run along military lines and founded in the 1950s to bring security, development and Han Chinese settlers — members of China’s largest ethnic group — to the region. Even now, the corps acts as a kind of parallel administration in Xinjiang, holding vast areas of land and operating its own schools, courts and other institutions.

But Tumxuk has also been drawn into the regionwide drive to transform Uighur society through indoctrination camps.

The government says the camps wean Uighurs and other Muslim minorities from religious extremism, while teaching them Chinese language and job skills. But former inmates have described harsh, even brutal treatment, and United Nations human rights committees and experts have condemned the camps for holding people in the camps without legal appeal.

Tumxuk has more than 160,000 inhabitants, nearly two-thirds of them Uighur, according to official population estimates, and government reports and records show that the city has built at least one camp, as well as other specialized schools, to “deradicalize” minority residents.

Uighurs are nearly all Sunni Muslim. In the previous decade some of them embraced more conservative strains of Islam, and Xinjiang experienced bursts of violence directed at government targets and Han Chinese people. The Chinese government said the violence was inspired and orchestrated by terrorists seeking an independent Uighur homeland, but many experts outside the country said the attacks often appeared to be poorly organized local efforts.

In 2017, a unit of the Xinjiang Production and Construction Corps in Tumxuk issued a tender notice inviting bids for building work on a “legal education and training center” — a phrase sometimes used for the indoctrination camps. The work required included installing video surveillance equipment and renovating dormitories and a canteen for the inmates. In 2017, Tumxuk also hosted a meeting of Xinjiang Production and Construction Corps officials to discuss the growing indoctrination drive, according to a corps report at the time.

The FSG deal would have put the company in direct business with Tumxuk officials. A news release that has since been removed from the FSG website included a photograph of local officials signing the memorandum. One was Li Zhenguo, the Communist Party secretary for Tumxuk, who recently warned about the rise of terrorism in the region.

According to a statement on the local government website on Friday, Mr. Li recently implored local officials to “always be on alert in the war against separatism and terrorism.”