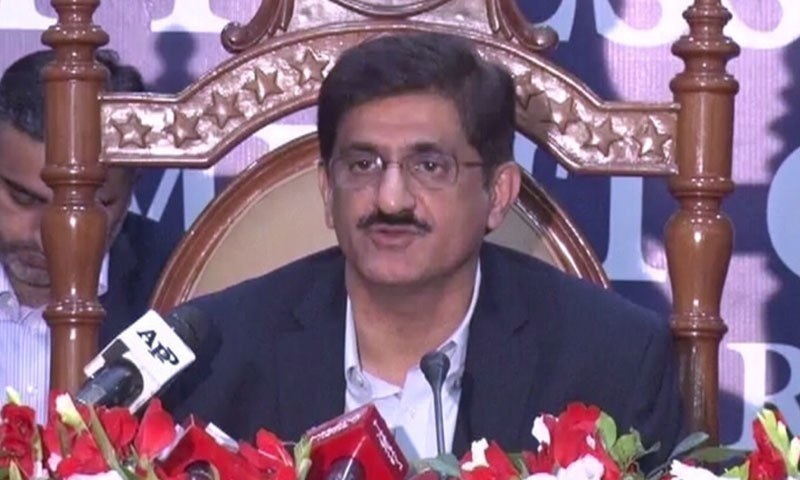 Allows snap checking in middle of roads, but not during morning rush hour. — File

KARACHI: Reviewing the overall weekly law and order situation in the province, Chief Minister Syed Murad Ali Shah has ordered that checking on the Sindh-Balochistan border be intensified and directed the Sindh inspector general of police to hold a tripartite meeting of all three police chiefs of the bordering provinces — Sindh, Balochistan and Punjab — to help improve law and order in the country, particularly in Sindh.

On Wednesday the CM directed the police to avoid vehicle checking in the middle of roads during morning office/school timings, provide foolproof security to the participants of Tablighi Ijtema in Manghopir and develop a traffic signal system in Hyderabad.

He also directed the IGP to work out a plan to establish Counter-Terrorism Department (CTD) units and install GSM locators and other facilities in every district headquarters to ensure security.

At the start of the meeting, the CM took notice of the killing of a KDA employee in PECHS and injuring of a man and his wife in police firing in Korangi. “How come policemen open fire in the market area?” Mr Shah remarked.

Allows snap checking in middle of roads, but not during morning rush hour

The IGP said he was personally monitoring investigation into the firing incident and agreed to the suggestion for in-service training of police on behaviour guidelines during an operation, snap-checking methods, chasing of culprits in busy localities.

When pointed out by the home secretary that some of the police stations were established in unauthorised buildings, the chief minister told the chief secretary and the IGP to sit together and identify proper places to shift such police stations.

Earlier, the IGP briefed the chief minister on police performance, saying that during the week under review vehicles were checked at some 1,700 spots in the province where more than 3,000 vehicles were impounded — 2,200 with fake number plates, 1,500 without number plates and 1,700 operating on transfer letters.

On a suggestion of Karachi AIG Dr Ameer Shaikh, the CM directed the IGP to start an operation across the province against vehicles using fancy number plates, fake government plates and being on “open letters”.

DIG South Sharjeel Kharal told the chief minister that he had established a “Street-watch Force”, which had helped bring street crime down in his district.

Referring to vehicle checking in the middle of main roads by police, adding to traffic congestion, the chief minister allowed the process to continue but not during the morning office/school hours.

DIG Kharal said that 15 gangs of street criminals had been busted while in six “encounters” carried out in Lyari, 16 criminals were arrested, 80 motorbikes and 70,000 litres of Iranian petrol were seized. In the meeting it was pointed out that some buses and other vehicles had set up separate tanks to bring Iranian petrol from Balochistan. The non-custom paid vehicles were also being used in smuggling Iranian petrol.

DIG West Ameen Yousafzai told the meeting that during snap checking, 22,000 litres Iranian petrol being brought to the city in a dumper and 84kg charas was seized in his zone while necessary measures were being taken to provide security at the Tablighi Ijtema in Manghopir on Jan 31.

The chief minister directed the IGP to launch an operation against such buses, trucks, dumpers and other vehicles and remove their tanks and penalise them. He also told the chief secretary to take up the issue of non-custom paid vehicles seized by police who handed them over to the Customs authorities but they reappeared on the roads.

DIG East said that because of strict checking, patrolling and coordination with civil society, the crime rate had come down in his zone.

The home secretary informed the chief minister that he had started holding meetings with the management of private educational institutions to sensitise them about drug peddling in the institutions.

The DIGs of Hyderabad, Sukkur, Larkana, Shaheed Benazirabad and Mirpurkhas also participated in the meeting via video link.

Larkana DIG Javed Akbar said that law and order in the division was satisfactory, but there were some problems in the katcha area and of tribal feuds where a targeted operation had been launched and actions taken to stop such feuds.

Hyderabad DIG Naeem Shaikh said law and order in his division was comparatively better. However, he had launched an operation against the drug mafia. On his pointing out traffic issues, the CM directed the chief secretary and the IG police that besides posting of police officers they should also develop a traffic signal system in Hyderabad city.

Mazhar Nawaz, DIG of Shaheed Benazirabad, told the meeting that law and order in his division was comparatively better. He also said that in view of important educational institutions, 10 railway stations, oil fields and railway tracks, a CTD unit was needed in his district for security.

He also informed the chief minister that there were 30 checkpoints along the Sindh-Balochistan border and last month he had held a meeting with his counterpart from Balochistan. Mr Shah directed IG police to develop a tripartite group in which the IGs of the three bordering provinces and their subordinate DIGs and SSPs meet once in two or three months to chalk out strategy for strict vigilance on the movement of outlaws on the borders.

Mirpurkhas SSP Abid Baloch said that motorbike theft/snatching incidents and gutka smuggling were major crimes in the area, where a special operation had been launched against criminals and five gangs had been busted. He also pointed out that suicide incidents were on the rise in the Tharparkar area.

The chief minister said that he had recently sent a team of the Sindh Mental Health Authority, led by its chairman Dr Karim Khwaja, with leading experts/psychiatrists to Mithi in Tharparkar. They were preparing a paper and would submit their recommendations to him.

He urged the SSP to involve local civil society and doctors and prepare a preliminary paper with recommendations and send it to him so that necessary measures be taken for the welfare of the people of the area.