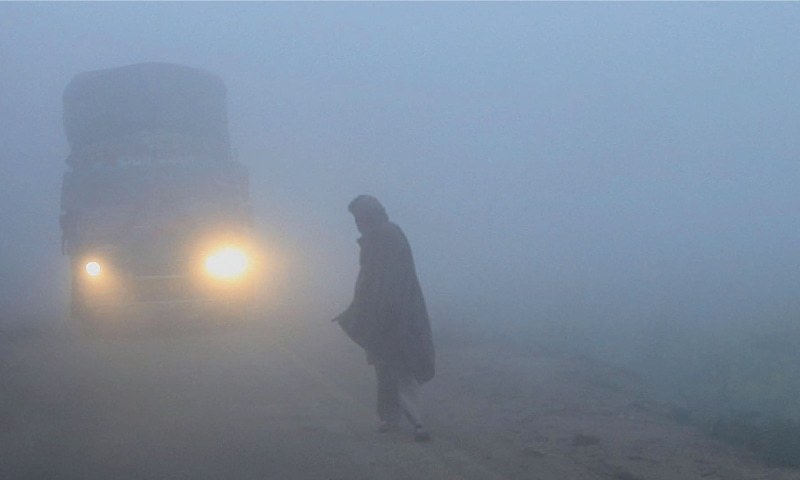 LAHORE: Traffic on GT Road slows down due to dense fog on Friday. Motorways were closed as visibility became zero in many areas of Punjab.—Online

KARACHI/LAHORE: Several parts of Sindh and Balochistan, including Karachi and Quetta, suffered a massive power breakdown that continued for many hours after an abrupt disconnection of power supply from the national grid on Friday morning, officials said.

Besides the two provincial capitals, Hyderabad and Sukkur in Sindh and Dera Murad Jamali, Naseerabad, Sibi, Jhal Magsi and Jafarabad in Balochistan also remained without power supply for hours after the suspension of power generation at Guddu power plant and other plants due to the tripping of various 500kV and 220kV transmission lines.

A spokesman for the National Transmission and Dispatch Company (NTDC) said: “Extensive fog caused tripping of both circuits of 500kV Dadu-Shik­arpur and Guddu-Shikarpur along with 500kV Shikarpur grid station.”

The impact of the massive breakdown was also felt in some areas of Punjab as the allocated electricity quotas of Lahore and Multan power supply companies was reduced in a bid to provide the supply to the outage-hit areas of Sindh and Balochistan.

The officials said the supply was later restored to routine levels. According to the spokesperson for the NTDC, power supply through the 220kV Sibi-Quetta transmission line was restored within an hour.

According to a K-Electric spokesman, power supply to Karachi was restored to normal levels within a few hours. The outage was also caused in other parts of the province due to the tripping of 500kV transmission line between Dadu and Guddu-Shikarpur.

“In a bid to ensure supply to the affected area of Sindh and Balochistan, the allocated power quota of Lesco and Mepco was squeezed, leaving the companies with no option but to observe loadshedding for some hours. However, after 4pm, the allocated quota was fully restored to the companies,” said an official source.

According to the NTDC, it energised the tripped transmission lines at 11:37am, restoring power supply to the affected areas through alternative sources.

However, an NTDC official said, there were reports that consumers in various parts of the country faced power suspension till 5:30pm when the power plants, which had stopped working in the morning due to the tripping of the transmission lines, resumed electricity generation.

“By 5:30pm, all tripped plants, except Port Qasim, resumed generation fully. The Port Qasim plant would take some time and it would resume operation by Saturday (today),” said an official of the NTDC.