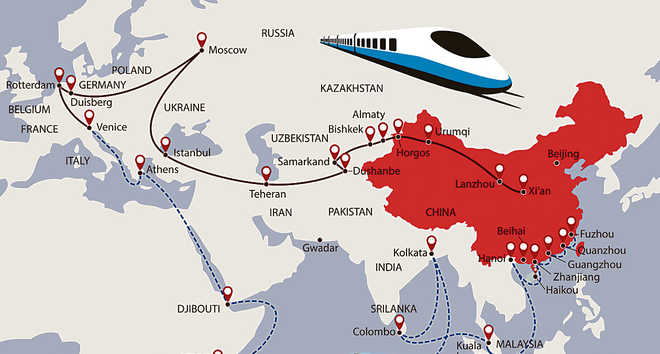 The New Silk Roads: The Present and Future of the World

Peter Frankopan’s first offering, The Silk Roads, was packaged differently. The book itself was in the shape of an elongated tourist guide with a stunning jade blue Persian motif as the jacket. The content was far from the Euro-centric visions of the Silk Route, which is not any particular avenue but the numerous pathways that connected one end of Asia to another, and then looped over the seas to connect other continents. The Mediterranean, for him was not the crucible of modern civilisation. It was a far more complex affair involving the transfer of goods, ideas and technologies and the bulk of the churning took place in the swathe from Persia to China with India and the stans in between.

His follow-up effort, The New Silk Roads, again has a stunning cover, is more contemporary as it assesses the geopolitical challenges, threats and opportunities that have merged from the Chinese push to the One Belt One Road project that aims to modernise several of the medieval era routes that have atrophied because of lack of funds. Frankopan’s Silk Roads are not roads in the modern meaning but denote the control of resource and long distance trade, the two aspects that fashion the rise of empires. If technological innovation has been stimulated, the same arteries have facilitated the spread of disease and violence.

Comparing today’s world with that of many centuries ago, we find that change is normal and a part of rhythm of history. Frankopan takes a leap of faith and rubs many trans-Atlantic geostrategic pundits the wrong way when he argues that it is the countries along the Silk Roads that will matter in the 21st century. Why, even Donald Trump spotted the trend a decade back when he began trademarking the Trump brand in several Silk Road countries. There are many reasons for his optimism. The first is the natural resources: the Middle East, China, Russia, Central Asia, East Asia and India account for bulk of oil reserves and food grains, the two items vital for civilisational continuity. On the flip side, the baddies also strike it rich for it accounts for most of the world’s heroin. The aim of the new Silk Roads is simple: the money pumped into China’s neighbours and countries of One Belt One Road will multiply several times over where trade links will grow stronger and faster, and therefore cost-efficient. Yet, China faces a demographic challenge — an aging population — besides debt levels that may have reached dangerous levels in some countries.

The positive parts of the change are economic and demographic growth but most cities are unprepared: Bengaluru’s taps could run dry by 2025, not too far away. Repression and progress go hand in hand in many of the nations. Along the Silk Road there is a great deal that is imperfect, scenarios can suddenly develop that lead to military conflict but as Frankopan says, the forces of instability are in the eye of the beholder.

The most important issue over the new Silk Roads is how China will deal with projects that run into trouble. The US will remain an irritant because of ‘brain drain and systemic failure’ in Washington. But for others, Frankopan says, a new world is being born. Nothing in it is straightforward or easy, marred as it is by rivalry, competition and tensions. Big changes are needed in India to stay in the game now that the grand alliance with the US seems to be a one-way street.