26 killed in fire after bus-truck collision near Hub 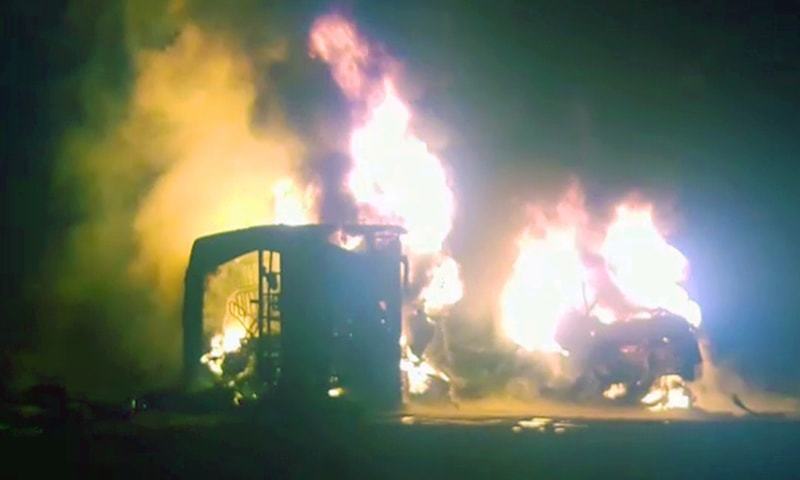 Flames engulf the passenger coach and the tanker after the collision. — DawnNewsTV

At least 26 people were killed in a collision between a passenger coach and a truck carrying fuel in Hub tehsil of Balochistan's Lasbela district on Monday, officials said.

The bus with more than 40 people on board was travelling to Panjgur from Karachi when it collided with the truck coming from the opposite direction.

A huge fire broke out following the collision, reportedly because the truck was carrying Iranian diesel. Huge flames engulfed the coach and the truck and trapped those inside the two vehicles.

“We have recovered 24 bodies from the vehicle. All of them were burned,” said Lasbela Deputy Commissioner Shabir Mengal. “The bus is very hot from the inside, we are taking out bodies slowly.”

At least 16 people were injured, five of them critically, and were shifted to a local hospital.

Efforts to shift the injured to Karachi — made because of a lack of facilities at the local facility — were delayed due to an absence of ambulances. The injured were finally on their way to Karachi once Edhi ambulances reached the accident site.

Edhi rescue workers are making efforts to pull out the remaining bodies from the bus. Most of the bodies recovered were burnt beyond recognition.