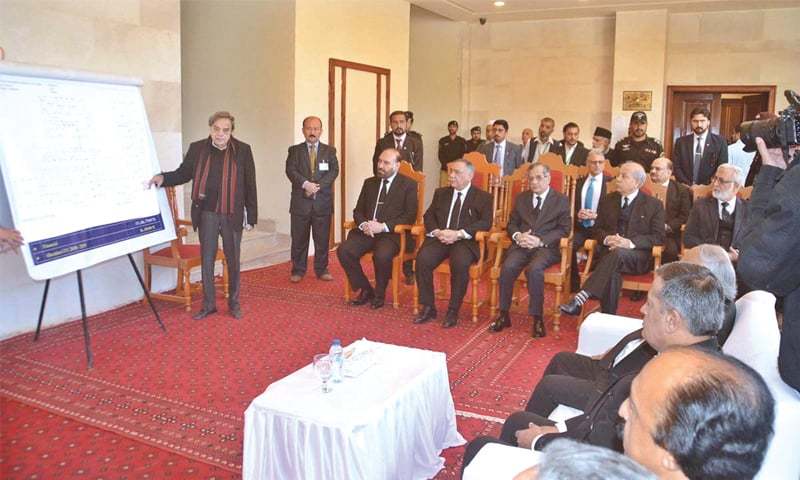 QUETTA: Chief Justice of Pakistan Mian Saqib Nisar has said the situation in Balochistan is deplorable and despite having huge mineral resources the people of the province are demanding the provision of even basic rights.

Addressing the inaugural ceremony of the newly constructed building of the Supreme Court’s registry here on Monday, the chief justice said the people of Balochistan complained that they were being neglected by Islamabad despite the fact that they had rendered great sacrifices for protecting the country.

CPEC: Hopes and fears as China comes to Gwadar

“I personally feel a sense of embarrassment while observing this situation about Balochistan,” he said, wondering why the chief secretary and the police chief belonging to other provinces were being posted in Balochistan. He said that although these were administrative issues, the concept of self-governance should be equal in Balochistan as in other provinces.

Justice Nisar said the judicial system in the country must remain strong after him as institutional issues were more important than individuals.

Deploring the previous government’s lack of interest in resolving the issue of water scarcity, he said the country today was facing the serious issue of decreasing underground water level. The present government, he added, was taking up this important matter seriously and issuing warnings that the country, especially Balochistan, would face a serious water crisis in future.

The chief justice regretted that the provincial governments had done nothing to resolve the worsening water crisis and asked shouldn’t be these governments held accountable for risking public lives.

“Taking sincere measures and patriotism are the only way of developing Pakistan,” he said, adding that time had come not to repeat past mistakes which pushed the country back. “We must take steps in right direction to take the country forward and utilise the available resources and benefit from the vast opportunities,” he said.

Justice Nisar said that at the request of honourable judges and bar members, he had increased the number of judges in the Balochistan High Court three months ago. “We have also increased the representation of Balochistan in the Islamabad High Court from seven to 10,” he added.

The chief justice expressed the hope that the SC Quetta registry would play its due role in providing swift justice to the people of Balochistan.