No progress made on Balochistan component of CPEC’s western route 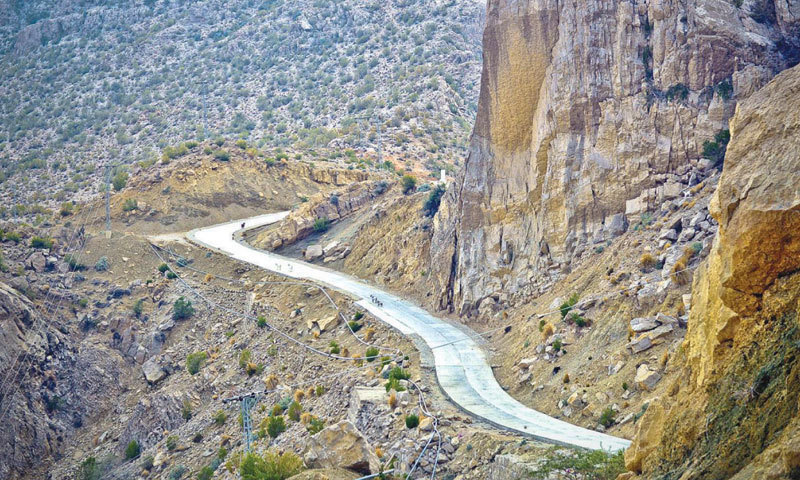 The Gwadar-Hoshab-Surab road road is neither part of the western route nor is it a CPEC project at all. — File photo

The China-Pakistan Economic Corridor (CPEC) is once again in the spotlight as one of the founders of the ruling party in Balochistan, Saeed Ahmed Ha­­shmi, has expressed concerns regarding the existence of its western route. While there are several dimensions to CPEC that merit debate, the focus in this article is on an evidence-based update on the status of the western route of CPEC.

Explore: CPEC —Hopes and fears as China comes to Gwadar

According to the Long-Term Plan of the mega-project, CPEC comprises one corridor and mul­­­tiple passages, including eas­­­t­ern, central and western alignments. These passages are joi­n­­ed together by common ali­gn­ments in the north and south. The southern common alignment starts at Gwadar and terminates at Basima. From Basima onwards, the corridor breaks into eastern, central and western passages. These passages re-converge at Burhan — which marks the beginning of the northern common alignment that passes through Thakot and Khunjerab.

Interestingly enough, the federal government describes the Gwadar-Hoshab-Surab road as a section of the western route in its official briefs and maps when in fact it is the southern common alignment. The government does so because this is the only road that has been built in Balochistan over the last five years.

The reality is that this road is neither part of the western route nor is it a CPEC project at all. This scheme was conceived during the period of General Pervez Musharraf. Construction work on it began in 2007, long before CPEC came into being. The federal government insists on showing it as part of the CPEC’s western route just to deflect political pressure and criticism and to disingenuously show that progress has been made on the route in Balochistan.

The western passage was supposed to be built on a priority basis. The grounds for this claim are as follows: First, the all-party conference held at the Prime Minister House on May 28, 2015 concluded that the western alignment of CPEC would be built first.

Second, the CPEC monographic study on transport planning (2014-2030), which was jointly conducted by the governments of China and Pakistan and approved by the fifth JCC in Nov 2015, provides the plan for short-term, medium-term and long-term transport and infrastructure projects under the umbrella of CPEC. This plan provided for the construction of an expressway from Burhan to D.I. Khan and the up-gradation of the existing road from D.I. Khan to Surab (via Zhob and Quetta) into a four-lane highway by 2020.

Work carried out in Balochistan

Over five years have passed since the memorandum of understanding on CPEC was signed in 2013 and progress on the western alignment remains virtually nonexistent. In fact, zero progress has been made on the 750km stretch of Balochistan component of the western alignment. Even worse, nearly three-fourths of the Balochistan component (Zhob-Quetta-Surab section) is not even included in the CPEC infrastructure portfolio. The only section that is officially on the CPEC infrastructure agenda is the D.I. Khan-Zhob section (205km) but here too no progress has actually been made. In contrast, construction work on the eastern alignment is likely to be completed by the end of 2019.

The D.I. Khan-Zhob road was approved as a short-term CPEC project in the fifth JCC held in 2015. Its feasibility study and PC-1 were completed in 2016 and approved by the Executive Committee of the National Economic Council (Ecnec) in May 2017.

Subsequently, a framework agreement was prepared and loan request was submitted to the Chinese side through the Economic Affairs Division. However, in Dec 2017 the Chinese government stopped the promised loan, arguing that previous procedure of release of funds was meant for early-harvest projects only and that new guidelines would be issued for financing non-early-harvest projects.

More than a year has passed since the loan was stopped, and the project remains without finances. In the last meeting of the joint working group on infrastructure held in October 2018, the project was once again postponed till next year.

The Zhob-Quetta and Quetta-Surab sections are not yet officially included in the CPEC agenda. Of these two sections, the Quetta-Surab section was supposed to be built through fina­nces from the Asian Development Bank under the CAREC programme. NHA was supposed to complete the feasibility study by March 2016 and submit the PC-1 to Ecnec for approval.

Three years on, NHA still hasn’t finalised the feasibility study and PC-1 for this road. About the Zhob-Quetta section, the federal government had pledged that it would be financed through the federal PSDP. Token amounts were allocated for this road in the federal PSDPs for 2017-18 and 2018-19, but no concrete step was taken.

In the revised PSDP for 2018-19, both the Zhob-Quetta and Quetta-Surab road projects have been deleted. Balochistan is also home to a section of the eastern alignment, i.e., the Basima-Khuzdar road. This road was approved as a short-term CPEC project in 2015. Like the D.I. Khan-Zhob road, the loan for this project was stopped by China in Dec 2017. The federal government pledged to finance this through the federal PSDP but hasn’t yet delivered on its promise. As a matter of fact, the amount allocated for this road in the revised PSDP for 2018-19 was reduced to mere Rs0.5 million.

Lastly, the directives for acquiring land for the above-mentioned roads were issued in 2015 by the office of the prime minister. In line with the premier’s directives, the Balochistan government conducted surveys, issued notifications under Section 4 of the Land Acquisition Act 1894, shared cost estimates with NHA in Dec­ 2016 and demanded the release of funds to the DCs concerned. Two years on, NHA still hasn’t released a penny for land acquisition, despite allocations being made for this purpose in the federal PSDPs for 2016-17, 2017-18 and 2018-19.

Given where things stand currently, the western alignment of CPEC is highly unlikely to be upgraded in the next five years, let alone be completed by 2020.

The writer is an independent public policy analyst and consultant, who has served as an adviser to the Balochistan government on CPEC