Balochistan is a victim of Pakistan's nuclear proliferation activities, said Naela Quadri Baloch, an activist for Baloch rights, who led a protest here on 70th anniversary of the Universal Declaration of Human Rights.

"Balochistan is a victim of nuclear proliferation activities of Pakistan and Iranwhile the early phase of the China-PakistanEconomic Corridor (CPEC) has directly victimised 1,00,000 people in the region," she said.

Braving rain and freezing temperature, the Baloch community held a protest camp in British Columbia in support of Voice of Baloch Missing Persons (VBMP) against enforced disappearances of 40,000 Baloch people, including women and children, by the armed forces of Pakistan and Iran, said a press release.

"Balochs are facing genocide. Being a Baloch is a crime in Pakistan and Iran.Every day, Balochs including women and children are targeted by the state armed forces. Every day, we get many new pains of abductions, rape, torture and mutilated bodies without organs," Naela said.

"Balochistan is a victim of nuclear proliferation activities of Iran and Pakistan, resulting in safety threats, drought, extinction of wild species, food and water scarcity and displacements," Naela said while holding her 9-month-old granddaughter, Gul Zarina Quadri Baloch while protesting.

"Around 1,00,000 people are directly victimised by the early phase of CPEC that includes forceful abductions, kill and dump, torture and rape as tool of colonising, stoppage of water supply and fishing routes for indigenous people, demolishing and setting on fire the whole populations from the sites of CPEC," she further stated while appealing to the United Nations Secretary-General Antonio Guterresfor an urgent intervention to save Baloch people.

Protestors distributed copies of an open letter to the UN Secretary-General, which appeals for urgent intervention in Balochistan to rescue Baloch people. Youth at the Art Gallery, Vancouver, stood in solidarity with the Baloch people and held banners at the protest.

The protestors also shed light on the Baloch Voice Association, led by Muneer Mengal, which has continuously raised concerns on the situation of enforced disappearances in United Nations Human Rights Council (UNHRC) for years, only for their pleas to fall on deaf ears.

VBMP continues to hold protests which have now lasted 4,000 days for the release of 40,000 enforced disappeared Balochs. 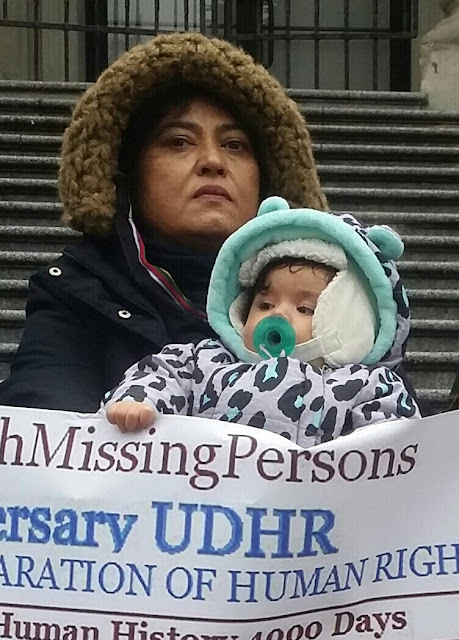