Why Balochs Are Targeting China 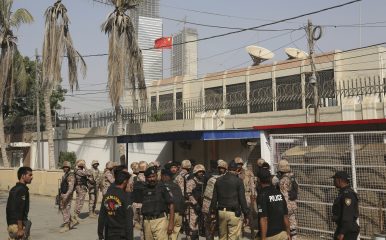 CPEC, Balochistan, and unresolved political issues are a potent mix.

Over the years, China-Pakistan relations have evolved positively. The mainstream media of the two countries always features the mantra of friendship and brotherly ties. Despite that, however, from day one China has been concerned about one thing in Pakistan: security. Both religious extremists and Baloch separatists have reportedly killed Chinese citizens inside Pakistan in the past.

Back in August, a suicide bomber attacked a bus carrying Chinese engineers in Balochistan’s Chaghi district. Aside from the attacker, there were no fatalities, but three of the Chinese engineers were injured along with three security personnel. The BLA was behind that attack as well.

It is no secret that Baloch separatists are opposed to Chinese working across the province. But last week marked the first time that Baloch separatists carried out attacks against Chinese officials in Karachi, which is located outside of Balochistan, in neighboring Sindh province. Many analysts argue that the Baloch separatists wanted to create panic among Chinese officials, and they have succeeded to some extent. Analysts also fear that these kinds of attacks will continue in the future. That is why the attack also raised questions about the security situation for the China-Pakistan Economic Corridor (CPEC) in Pakistan in general and in Balochistan in particular.

Religious extremists in Pakistan have also reportedly killed Chinese citizens. Their anger dates back more than a decade, to the crackdown on Lal Masjid (mosque) in Islamabad in 2007, which many believe was the result of Chinese pressure on the Pakistani government. More recently, heavy-handed repression China’s Muslim majority region of Xinjiang is also stirring up anti-China sentiments in Pakistan. These factors, among others, have driven religious extremists to act against Chinese citizens in Pakistan. In the past, when Pakistan has taken robust actions against religious and sectarian militant groups across the country, Chinese nationals have been kidnapped and killed in response.

The attacks targeting the Chinese consulate in Karachi and Chinese engineers in Balochistan suggest that Baloch separatists have changed their modus operandi, becoming more radicalized. For instance, they have followed in the footsteps of religious extremists by using suicide bombings in their latest attacks.

Pakistan’s Prime Minister Imran Khan and Chief of Army Staff (COAS) General Qamar Javed Bajwa unequivocally condemned the attack on the Chinese consulate and praised the security forces for preventing more serious causalities. After that, Pakistan’s mainstream media, especially TV channels, accused India of being behind the attack on the consulate. Reuters reported that India issued a swift condemnation of the attack on the Chinese consulate, but analysts in Pakistan assert that India has been supporting Baloch separatists in Balochistan, which shares borders with Afghanistan and Iran.

The Chinese Embassy in Pakistan also strongly condemned the attack, stating: “We believe that the Pakistan side is able to ensure the safety of Chinese institutions and personnel in Pakistan. Any attempt to undermine the China-Pakistan relationship is doomed to fail.”

Baloch nationalists have long been opposed to the Chinese presence and investments projects in Balochistan. They are apprehensive about CPEC developments in their province as many Balochs fear the wave of investment will bring about demographic changes, turning them into a minority group in their own province.

The multibillion dollar project originates from Balochistan’s Gwadar port. That means China cannot simply pull up stakes and move to safer ground; instead, Beijing has to find a way to safeguard its CPEC investments in Balochistan. Chinese engineers have been killed while working in the province in the past, and Baloch separatists have repeatedly taken to social media to threaten assaults on CPEC projects.

It is crystal clear China has its own geostrategic and geoeconomic interests in Pakistan. China thus wants CPEC to succeed at all costs. On the other hand, China is extremely concerned about the Baloch militant groups opposing the CPEC project. Chinese analysts have recommended that the Chinese government take care to build up local support for the project to ensure its success. As Shi Zhiqin and Lu Yang put itin a paper for the Carnegie-Tsinghua Center, “China should abandon its traditional way of dealing only with the Pakistani government and instead get in contact with local communities to better accommodate local interests so that more Pakistani people can benefit from the CPEC.”

The Financial Times also reported thatChina has been secretly holding talks with Baloch separatists in order to protect CPEC. But soon after the report all the parties involved – China, Pakistan, and the Balochs – denied it.

Balochistan’s former Chief Minister Dr. Abdul Malik Baloch (2013-2015) had been pushing for talks with Baloch separatist leaders. He reportedly held a series of secret meetings with Brahumdagh Bugti, one of influential separatist Baloch leaders. According to some accounts, he was also accompanied by ex-federal minister Lt. General (Retd) Abdul Qadir Baloch. But unfortunately, these talks failed to produce any results.

CPEC has been dubbed a game changer by Pakistani officials. But have the Balochs been able to voice their perspective? Even though CPEC originates from Gwadar and Balochistan, the Balochs have hardly been discussed in official rhetoric about the project. There is no evidence that the Baloch will reap the benefits of having CPEC in the province.

As a result, many Balochs are apprehensive because their consent was not sought at the time of the announcement of CPEC — despite the fact that their land makes the backbone of the corridor. Also, Balochs themselves foresee a wave of Pakistanis from outside their province arriving and investing in Gwadar following CPEC.

It is a common fear among Balochs – not only Baloch nationalists — that these CPEC-related projects will bring about a demographic change in the near future. Already, many people in Gwadar have sold their lands at cut-rate prices to investors from outside of Balochistan. Baloch nationalists see this trend as a “take over” that it will be demographically a disaster for Balochs, because it will change the ethnicity of the area.

CPEC projects are likely to escalate the conflict between the Balochs and the state, as these two forces did not trust each other from the very beginning. Pakistan has already announced that it will provide a 10,000-strong security force to protect CPEC, while Baloch separatists have carried out attacks on workers along the route.

Pakistan has a history of trying to achieve objectives in a rush, without taking the time to develop a grounded understanding of the issue involved. That history is playing out again in Balochistan with CPEC. The question is: can Pakistan (even with China’s help) bring about development in a province hit by insurgency after insurgency?

Make no mistake: Balochs want development. After all, 75 percent of Balochs live in rural areas. They also want to be part of that development, but before that Pakistan has to resolve the Baloch political issue. Only then can development take place in a safe environment.

Balochs have always been dealt an iron hand. But today, unlike the past, Balochs are educated, literate, and aware of their political rights.

Besides Balochistan, a great number of Baloch youths are studying in different universities of Punjab, Sindh, and Khyber Pakhtunkhwa provinces. But after completion of their education, they mostly remain jobless. There is a golden opportunity for the state of Pakistan to involve the Baloch youths in CPEC-related projects, both to create jobs for them and create buy-in from the Baloch population. Balochs need to see evidence that the development coming with CPEC is for them, not for outsiders.

If Pakistan fails to convince young Balochs of that, they may join the Baloch separatists in fighting against the state.