Last week’s terrorist attacks in Orakzai district and Karachi in a span of few hours show that the fight against terrorism is far from over. 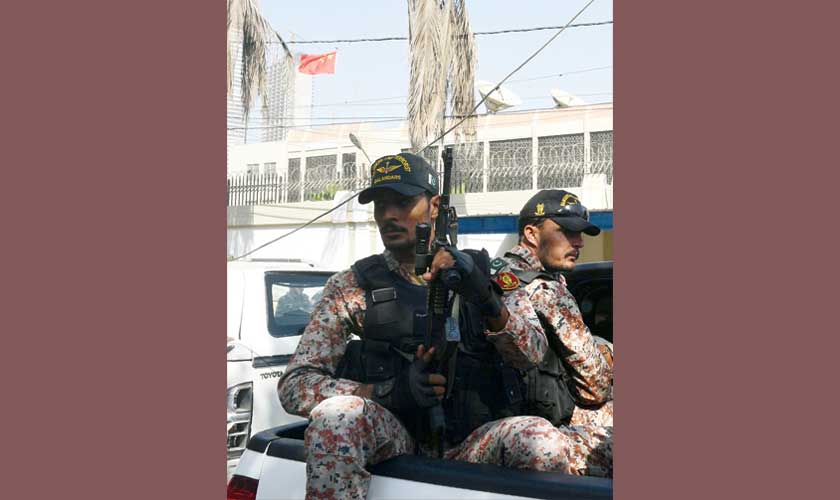 Last week’s terrorist attacks in Orakzai district and Karachi in a span of few hours show that the fight against terrorism is far from over.

Apparently, there is no link between the two attacks that took place in areas thousands of miles apart but the assaults show that terrorists still have the capacity to strike despite suffering heavily in massive crackdown against them over the past few years.

The timely action of the security forces, particularly police, averted a major tragedy in the financial and commercial hub of the country but the attack once again exposed evil designs of the inimical forces to undermine Pakistan’s time-tested relationship with China and harm economic interests of the country.

According to Prime Minister Imran Khan the government had anticipated such terrorist attacks in the wake of his visit to China but did not have exact information about the targets. He deemed his China visit highly successful but refused to divulge the details of the achievements.

There is no doubt that the threat of terrorism has been significantly neutralized because of a spate of military offensives in the country particularly in the northwest regions bordering Afghanistan.

There has been a tangible drop in terrorist attacks but in order to consolidate these achievements and put the country to the path of economic development we could not afford to lower our guards.

China Pakistan Economic Corridor (CPEC) has to play a game-changing role in the economic development and progress of the country and we have to further bolster our all-weather ties with China.

Therefore, the government as well as security establishment had to take all requisite steps to ensure safety and protection of Chinese nationals working in Pakistan. In order to reap maximum benefit from CPEC, peace and stability is a must in Baluchistan where the project is largely based.

A genuine political reconciliation process aimed at addressing grievances of the people of Baluchistan must be launched to create a congenial atmosphere for smooth execution of the CPEC project.

The government needs to reach out to the nationalist forces in Baluchistan with the support of all stakeholders to initiate a dialogue process to find a negotiated and political solution for the redressal of the grievances.

The neighbouring Afghanistan has been and would continue to be a hub of big powers’ Great Game for more time to come. The players at work there would intend to keep the pot boiling by inciting violence in Baluchistan as it the shortest and most feasible route to sea waters for the land-locked country and the central Asia.

In such a situation, Pakistan needs to keep its own house in order and this could only be achieved through a grand and genuine reconciliation process at home particularly by bringing in disgruntled elements into the national mainstream.

Only such an effort could bring in the stability that is a pre-requisite for the success of a gigantic project like CPEC. Failing this, the foreign powers would continue to exploit dissident voices and elements in their favour.

The PTI government has been making tall claims of making big endeavours to address economic challenges faced by the country but so far has not made any effort for a genuine reconciliation process.

During formation of government it did sign an agreement with the Baluchistan National Party faction led by Baluch leader Sardar Akhtar Mengal but has not yet any effort to fulfil the promises it made to it. The federal government in fact is locked in tussle with the opposition parties at the centre which has kicked up political temperature in the country.

The government needs to bring down political tensions and divert its attention to resolve the real problems faced by the country.

While speaking in the cabinet after the last week twin attacks, the prime minister expressed his government’s resolve to crush the terrorists at all cost but at the same time he need to take political leadership into confidence as the ruling party alone could not take the country out of the current mess.

The governing coalition particularly prime minister personally use the parliament’s forum to evolve a national strategy to deal with the challenges faced by the country.

Pakistan has been making relentless efforts for peace in Afghanistan but it also needs to open discussion with the war-ravaged nation for its participation in the CPEC. Regional economic integration and economic cooperation among the neighbouring countries could be used as the main weapons to defeat insurgencies and terrorism in troubled regions.

At the time when the United States has opened direct communication with the Taliban, the Pakistani leadership needs to play a pro-active role not just in facilitating a peace process there but also draw up strategies to take part in the economic development process in the post-reconciliation period.

Pakistan needs to take a giant initiative inside and outside its borders to bring about a grand reconciliation that brings peace and prosperity in the region.

The execution of mega projects like piping natural gas from the Daulatabad fields of Turkmenistan to India via Afghanistan and Pakistan would only be possible if there is peace across the region where this proposed pipeline would be laid.

The TAPI and several such projects have sarcastically been dubbed as “pipedreams” as no tangible progress has been made because of bad security situation for decades along the route of these projects.

Now that the prospects of these projects becoming a reality are growing with a realization in the United States for a negotiated settlement of the Afghan imbroglio, Pakistan, taking benefit of its geostrategic location, needs to expedite its own efforts in this regard.

Though relations between Pakistan and the United States are at their lowest ebb which was reflected in the recent provocative tweets by the U.S. President Donald Trump, but both countries need each other help at least in bringing peace in Afghanistan and this desire was reflected in comments from the Pentagon officials after Trump’s tweets. Therefore, for the sake of regional peace as well as economic development, Pakistan needs to redouble its efforts to end instability in the region.

The writer is a senior journalist based in Islamabad