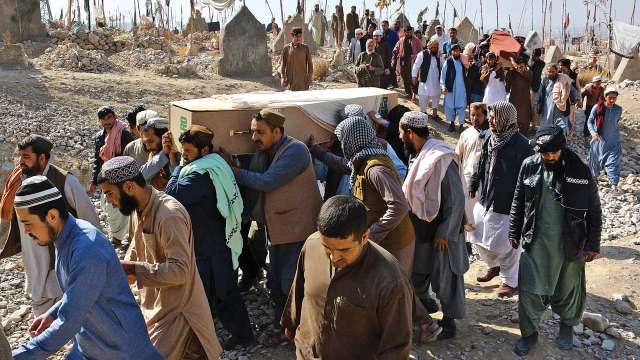 The storming of the Chinese consulate in Karachi on November 24 by three heavily armed suicide squad members of a Baloch separatist group is loaded with meaning and message. It should be read correctly for understanding what gave rise to the attack and how the conditions that caused it may be eliminated.

While China’s diplomatic mission was the immediate target of the attack, which left seven including three of the terrorists dead, the larger target is the China-Pakistan Economic Corridor (CPEC) and China-Pakistan relations in all its dimensions.

The message seems to be that Baloch separatists will give no quarter to CPEC projects extending from Gwadar in Balochistan to Kashgar in China’s Xinjiang province. The Gwadar-Kashgar corridor, with a number of Special Economic Zones (SEZs) along the route, would be passing through the provinces of Punjab, Sindh, Balochistan and Khyber Pakhtunkhwa and Gilgit-Baltistan in northern Pakistan.

The $46-billion CPEC, in operation from November 2016, faces multiple – political, economic, financial, environmental and social – challenges. In spite of the problems, concerns and controversies, the Chinese have made admirable progress and succeeded in moving an impressive volume of goods from Kashgar to Gwadar in the last two years.

Thus, first and foremost, China’s resolve and success in persisting with the CPEC has led to this attack. There is no circumstantial evidence indicating the involvement of any other country. Yet the inference in informed quarters is that the Baloch separatists are, perhaps, only the instruments of powerful western interests and forces, which are determined to thwart China’s “infrastructural expansionism”.

Even so, the reality is that these forces have only capitalised on discontent fuelled by the CPEC in a restive Balochistan and motivated terror groups to strike.

Balochistan is aggrieved at not getting its due share of development out of the CPEC. There is no economic, entrepreneurial or employment spin-off for Balochistan as the CPEC is perceived as passing through the province. This has caused resentment and, combined with the suppression of Baloch rights and aspirations, is a powder keg.

Secondly, since the terrorists and their patrons exploited this situation of Balochis being reduced to deprived spectators, Pakistan and China must address the expectations of the Balochis. A good first step would be a more inclusive CPEC model of development with tangible outcomes to satisfy the people of Balochistan. That would eliminate one of the major conditions, which has sustained separatism and spawned terrorism.

Thirdly, there is no basis for the fear that China and/or Pakistan will backtrack on the CPEC, or that investors would be scared away, as Pakistani Prime Minister Imran Khan apprehends. Investors enjoying the full support of the Chinese and Pakistani state machinery and their armed might are unlikely to be put off by this attack. China and Chinese companies are the biggest investors in CPEC. In the unlikely event of any investor backing out, China has the surplus capital as well as capital goods to go ahead with completion of all the projects.

Fourthly, it would be counter-productive for Pakistan and China to jointly launch an offensive against Baloch separatists as suggested by Pakistani Foreign Minister Shah Mehmood Qureshi. While China has chosen to ignore and not commented on Qureshi’s idea, if pursued, it can only hurt the interests of Pakistan, Balochistan, the CPEC, China and Pakistan-China relations. Any Sino-Pakistan joint operation against Balochis would not make a distinction between separatists and the people of the province. It would be an all-out, indiscriminate military offensive, which would exacerbate the situation. As Pakistan’s most powerful all-weather friend, Beijing may not wish to court the anger of the Balochis and give the separatists more reason to target China. Besides, it would give mischief mongers abroad a handle to further exploit the political unrest in Balochistan.

Finally, the Government of India has taken a correct stand in aftermath of the attack, although it has been opposed to the Belt and Road Initiative (BRI) of which the CPEC is a part. India has raised concerns over the CPEC, especially its passing through Gilgit Baltistan. There are also CPEC investments and projects in what India holds to be “occupied territory”. Yet India was quick to condemn the terrorist attack, stating: “There can be no justification whatsoever for any act of terrorism. The perpetrators of this heinous attack should be brought to justice expeditiously.”

At the same time, India has denounced Pakistan’s repression of the Baloch people and violation of their human rights. New Delhi has sent out an unambiguous message that whatever its differences with China, reservations about CPEC and inclinations towards the cause of the Baloch people, India is uncompromisingly opposed to terrorism.