A Chinese recession is inevitable - don't think it won't affect you

Analysts say a Chinese recession would only hurt the region. That may be wishful thinking 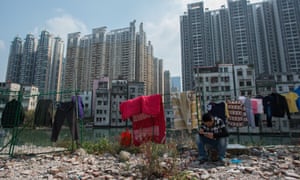 When China finally has its inevitable growth recession – which will almost surely be amplified by a financial crisis, given the economy’s massive leverage – how will the rest of world be affected? With US President Donald Trump’s trade war hitting China just as growth was already slowing, this is no idle question.

Typical estimates, for example those embodied in the International Monetary Fund’s assessments of country risk, suggest an economic slowdown in China will hurt everyone. But the acute pain, according to the IMF, will be more regionally concentrated and confined than would be the case for a deep recession in the United States. Unfortunately, this might be wishful thinking.

First, the effect on international capital markets could be vastly greater than Chinese capital market linkages would suggest. However jittery global investors may be about prospects for profit growth, a hit to Chinese growth would make things a lot worse. Although it is true that the US is still by far the biggest importer of final consumption goods (a large share of Chinese manufacturing imports are intermediate goods that end up being embodied in exports to the US and Europe), foreign firms nonetheless still enjoy huge profits on sales in China.

Investors today are also concerned about rising interest rates, which not only put a damper on consumption and investment, but also reduce the market value of companies (particularly tech firms) whose valuations depend heavily on profit growth far in the future. A Chinese recession could again make the situation worse.

I appreciate the usual Keynesian thinking that if any economy anywhere slows, this lowers world aggregate demand, and therefore puts downward pressure on global interest rates. But modern thinking is more nuanced. High Asian saving rates over the past two decades have been a significant factor in the low overall level of real (inflation-adjusted) interest rates in both the US and Europe, thanks to the fact that underdeveloped Asian capital markets simply cannot constructively absorb the surplus savings.

Former US Federal Reserve chair Ben Bernanke famously characterised this much-studied phenomenon as a key component of the “global savings glut”. Thus, instead of leading to lower global real interest rates, a Chinese slowdown that spreads across Asia could paradoxically lead to higher interest rates elsewhere – especially if a second Asian financial crisis leads to a sharp draw-down of central bank reserves. Thus, for global capital markets, a Chinese recession could easily prove to be a double whammy.

As bad as a slowdown in exports to China would be for many countries, a significant rise in global interest rates would be much worse. Eurozone leaders, particularly German Chancellor Angela Merkel, get less credit than they deserve for holding together the politically and economically fragile single currency against steep economic and political odds. But their task would have been well-nigh impossible but for the ultra-low global interest rates that have allowed politically paralysed eurozone officials to skirt needed debt write-downs and restructurings in the periphery.

Business Today: sign up for a morning shot of financial news

When the advanced countries had their financial crisis a decade ago, emerging markets recovered relatively quickly, thanks to low debt levels and strong commodity prices. Today, however, debt levels have risen significantly, and a sharp rise in global real interest rates would almost certainly extend today’s brewing crises beyond the handful of countries (including Argentina and Turkey) that have already been hit.

Nor is the US immune. For the moment, the US can finance its trillion-dollar deficits at relatively low cost. But the relatively short-term duration of its borrowing – under four years if one integrates the Treasury and Federal Reserve balance sheets – means that a rise in interest rates would soon cause debt service to crowd out needed expenditures in other areas. At the same time, Trump’s trade war also threatens to undermine the US economy’s dynamism. Its somewhat arbitrary and politically driven nature makes it at least as harmful to US growth as the regulations Trump has so proudly eliminated. Those who assumed that Trump’s stance on trade was mostly campaign bluster should be worried.

The good news is that trade negotiations often seem intractable until the 11th hour. The US and China could reach an agreement before Trump’s punitive tariffs go into effect on 1 January. Such an agreement, one hopes, would reflect a maturing of China’s attitude toward intellectual property rights – akin to what occurred in the US during the late 19th century. (In America’s high growth years, US entrepreneurs often thought little of pilfering patented inventions from the United Kingdom.)

A recession in China, amplified by a financial crisis, would constitute the third leg of the debt super-cycle that began in the US in 2008 and moved to Europe in 2010. Up to this point, the Chinese authorities have done a remarkable job in postponing the inevitable slowdown. Unfortunately, when the downturn arrives, the world is likely to discover that China’s economy matters even more than most people thought.

•Kenneth Rogoff is professor of economics and public policy at Harvard University. He was the IMF’s chief economist from 2001 to 2003.