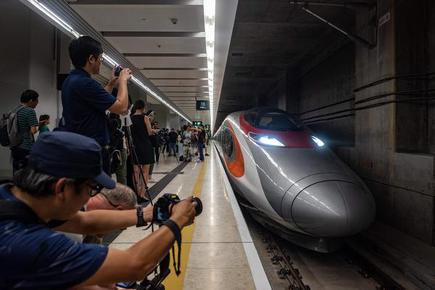 By linking up with Guangzhou, Hong Kong will be physically connected, and integrated, with China’s vast web of high-speed rails. The world’s biggest, and still expanding, steel network of high-speed tracks already covers 25,000 km. Once Hong Kong is connected to the mainland through bullet train, Beijing will be just eight hours and 56 minutes away.

Symbolically, the rail link represents Hong Kong’s firmer economic and people-to-people integration into the mainland. However, Chinese planners have made it plain that closer Hong Kong-mainland ties will not infringe the “one-country-two systems” political formula, which guarantees the island’s distinct identity, autonomous business-friendly rules and unique laws of governance.

Inauguration of the Zhuhai-Hong Kong-Macau bridge later this year is also a much-awaited event on China’s 2018 calendar. This mega project will expand the mainland’s connectivity with the former British and Portuguese colony. The 56 km bridge has been built to withstand super-typhoons, a magnitude s8 earthquake, as well as hits by supersized cargo ships.

A 6.7 km underground sea tunnel to allow uninterrupted flow of shipping above, along the super-busy Pearl River Delta, is also part of the bridge’s design. In the end, it will cut the travel time between the three cities from three hours to just 30 minutes.

Chinese planners aim to bring Hong Kong and Macau closer to the mainland through better rail and road links. They also believe the connectivity will act as a boost for the Belt and Road initiative

Apart from an expected surge in business, an exponential rise in tourism is also anticipated. The number of visitors to Macau, known for its dense concentration of glitzy casinos and night life, is expected to spiral. In Zhuhai, fresh infrastructure is cropping within its leafy surroundings for family tourism to bloom. China’s ambitious connectivity projects are fusing into its much larger plan to establish a regional Greater Bay Area (GBA). That would mean seamless integration of 11 major cities in China’s coastal Guangdong province with neighbouring Hong Kong and Macau. As a result, the giant GBA of 68 million people will rival the San Francisco Bay Area of the U.S., as well as the Tokyo Bay Area of Japan.

China’s mandarins say that the once the GBA takes root, it will boost President Xi Jinping’s signature Belt and Road connectivity initiative for Eurasia. “Hong Kong, as one of the major international financial centres, has advantages in a wide range of areas, including investment, risk assessment, finance, insurance, accounting, legal services and arbitration,” says Jin Liqun, head of the Asian Infrastructure Investment Bank (AIIB).

The former British colony — a global financial centre as well as a world class port — can also pitch-in with badly needed funds to develop infrastructure in the Belt and Road space. “Hong Kong’s capability in allocating global financial resources could help reduce the bottleneck of financing for these projects,” Chen Siqing, president of the Bank of China, has been quoted as saying.

Yet, funding gaps could still remain as a massive $1.5 trillion per year may be required to cover the costs of infrastructure development to fulfill Mr. Xi’s soaring Belt and Road dreams.

Atul Aneja works for The Hindu and is based in Beijing.