ISLAMABAD: Minister for Defence Pervez Khattak on Monday expressed the hope that Japan would help create economic activities in Pakistan through participation in the China Pakistan Economic Corridor (CPEC) and investment in maritime and industrial manufacturing sectors.

Talking to Japanese Ambassador Takashi Kurai in Islamabad, the defence minister also appreciated the role of Japan in the promotion of peace and stability in Afghanistan and south Asian region.

He also commended the efforts of the Japanese government for regular holding of Pakistan-Japan politico-military and military to military dialogues.

The defence minister mentioned the potential to cooperate in the defence field and need to strengthen the existing level of defence collaboration.

He highlighted Pakistan’s efforts to eradicate terrorism especially the success of Operations Zarb-e-Azab, Radd-ul-Fasad and Khyber-IV.

The Japanese ambassador on the occasion assured of his government’s continued support to Pakistan and exploring new avenues of mutual collaboration. 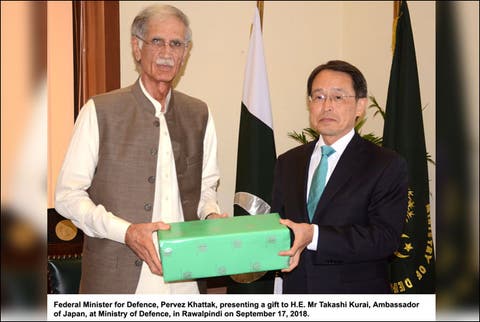 Earlier this month, Deputy Chairman Senate, Senator Saleem Mandviwala has underscored the need for boosting trade and economic ties between Pakistan and Japan for mutual benefit of the two sides.

He said that the trade volume between the two sides is less than the size of relations which the two countries enjoyed since decades.

Senator Mandviwala proposed frequent interaction and increased exchange of delegation at parliamentary level, saying that such interaction would pave the way for further boosting trade and economic ties.

He also emphasized that parliamentary friendship groups of both sides also need to play more vibrant and active role and both sides need to get maximum benefit from the multi-level interaction by setting some goals and achieve them through mutual cooperation.