As part of its Belt and Road Initiative, China will work to build economic and security ties with Ukraine, Belarus and Moldova in the coming years.A variety of factors, including insufficient infrastructure and competition in the region between Russia and the West, will complicate China's expansion in these states.Forging deeper relationships with China will give Ukraine, Belarus and Moldova more leeway for negotiating the standoff between Russia and the West, though Beijing will be careful not to encroach on Moscow's interests in the region.

As China expands its influence around the world, Europe has become a prime destination for Chinese investment and infrastructure projects. Chinese companies have poured over $300 billion into the Continent over the past decade, lately under the Belt and Road Initiative, to acquire strategic assets in Western Europe, develop energy and port infrastructure in Southern Europe and increase transport connectivity to Eastern Europe. Three former Soviet states – Ukraine, Belarus and Moldova – have emerged as an important part of this effort, offering China an overland corridor to access the European market. Because of their small economies and their geographic position between Russia and the West, however, the countries will present a challenge for China's Belt and Road Initiative.

The 2018 Annual Forecast noted that China would use its sprawling Belt and Road to extend its influence around the world. Eastern Europe has become a focus of this endeavor, though geopolitical factors in the region – and China's growing ties with Russia – will limit Beijing's reach there.

The Financial Side of China's Interest

One of China's primary areas of focus in Ukraine, Belarus and Moldova – as in most of Eastern Europe – is economic. The countries offer China a wealth of desirable resources, including minerals and agricultural products; Ukraine, for example, is now China's leading supplier of corn, having surpassed the United States in 2017. And though trade between the three states and China has remained steady over the past decade, Moldova is currently in talks with Beijing over a free trade deal that the two sides are expected to finalize by the end of this year.

Infrastructure, however, is the main economic attraction for China. A Chinese company completed a project to upgrade Ukraine's Yuzhny port on the Black Sea late last year, and similar projects in Odessa and Chornomorsk are also under consideration. The China Pacific Construction Group has even signed a memorandum of understanding for a $2 billion deal to build a fourth metro line in the Ukrainian capital, Kiev. Beijing has launched several ambitious development projects in Belarus, including the Great Stone Industrial Park, which will become China's largest overseas industrial park. As of early last month, Chinese companies had invested nearly $1 billion in the project. One of the project's main stakeholder companies, China Merchants Group, also has designs on a terminal in Lithuania's Klaipeda port, a hub for Belarusian imports and exports. In addition, Chinese automaker Geely has signed a memorandum of understanding with Belarus for an assembly plant in the Eastern European country.

But however promising these deals appear, many of the projects are in the infancy, meaning they could yet fizzle out– like numerous Belt and Road Initiative projects in other countries. The Stone Industrial Park has already encountered problems that caused its developers to abandon their vision for a tech-oriented special economic zone and change the requirements for resident companies. Furthermore, without a basic trade agreement with the European Union, such as Ukraine's association and free trade agreement, Belarus may have trouble drawing foreign companies to the park. And the economic limitations of Ukraine, Belarus and Moldova mean that participating Chinese firms must shoulder most of the burden in financing infrastructure projects there. 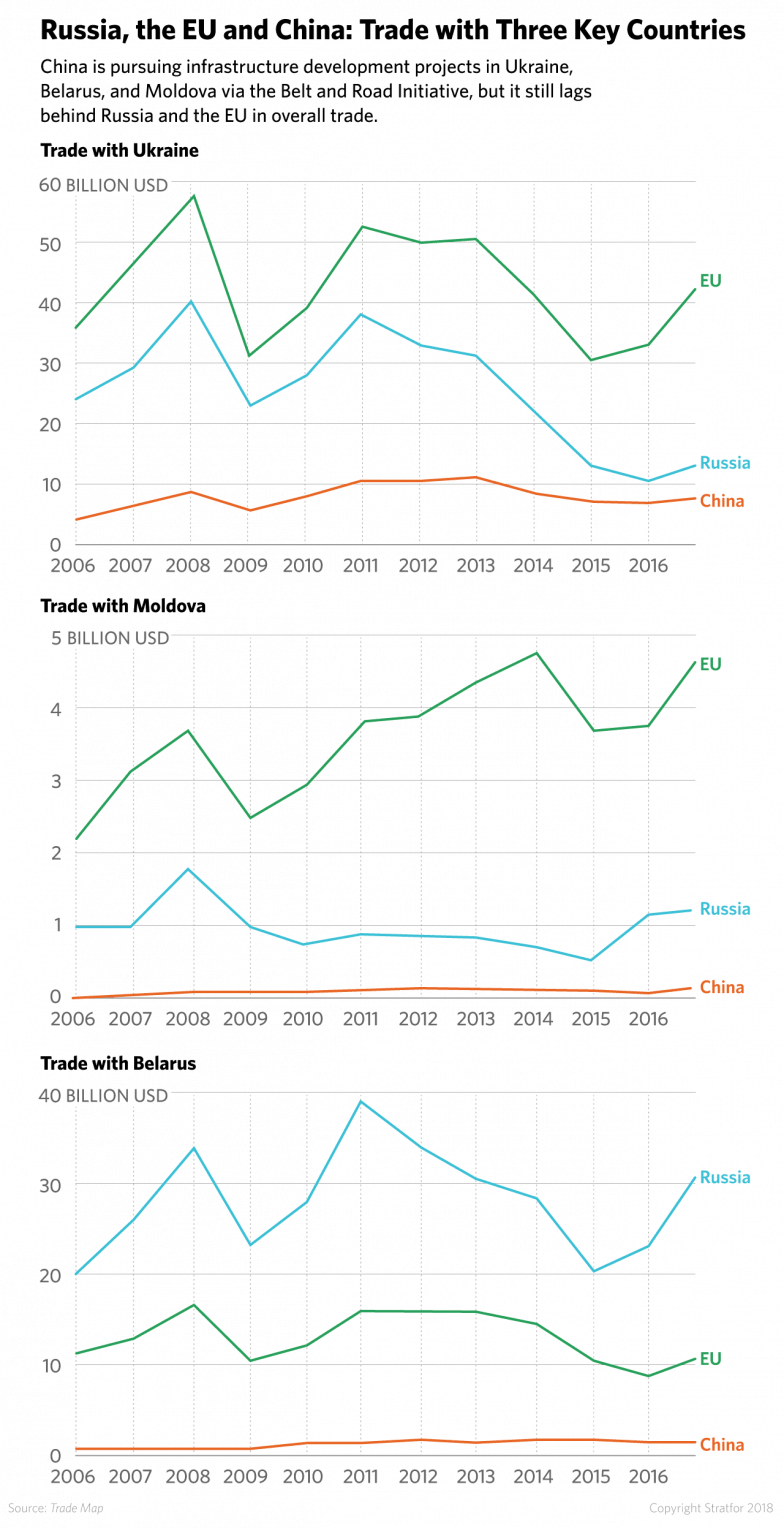 Building Security Partnerships, to a Point

Beyond trade and infrastructure, Beijing is also working to increase security cooperation with the three countries. China has become one of Ukraine's biggest markets for arms exports, buying $83 million worth in 2017, and has even discussed the joint production of Ukrainian Antonov planes with Kiev. The Ukrainian government, however, is wary that Beijing will steal the designs to produce its own aircraft domestically, as it did with the first aircraft carrier it bought from Ukraine in 1998. In fact, Ukrainian intelligence services have put a freeze on the acquisition of Ukraine's sole aviation turbine manufacturer, MotorSich, by a Chinese billionaire.

Belarus, meanwhile, receives annual technical and military aid from Beijing – albeit in an amount far smaller than the support it obtains from Russia. It is also working with China on developing a multiple launch rocket system, the "Polonez," but it has so far failed in negotiations to acquire the equipment it needs from the Chinese military.

China's security ties with Moldova are more modest by comparison. For one, the current government in Chisinau is prioritizing cooperation with NATO. For another, the intensifying competition between Russia and the West will impede Beijing's efforts to strengthen its military links with Moldova as parliamentary elections approach in the country. But Chisinau will still try to take advantage of any economic opportunities that Beijing is willing to offer.

Despite the strides it has made in Eastern Europe, China will only progress so far in its attempts to expand its economic and security role in Belarus, Ukraine and Moldova. Belarus' close ties with Russia – as a member of the Eurasian Economic Union and of the Collective Security Treaty Organization, both of which Moscow leads – will limit China's reach there. Russia's interests in Ukraine, along with the conflict in the eastern part of the country, will likewise keep Chinese influence in check. Beijing, after all, will want to avoid getting in Moscow's way to preserve the pair's budding relationship. (To that end, it may take the same approach in Eastern Europe that it has in Central Asia, sticking mainly to an economic role and deferring to Russia on security matters.) As for Moldova, its small territorial and economic size will limit China's interest – as will the more than 1,000 Russian troops stationed in the breakaway territory of Transdniestria. Regardless, Ukraine, Moldova and Belarus will make the most of China's investments and security involvement, which will give them more foreign policy options as Russia's standoff with the West continues, not to mention financial benefits.